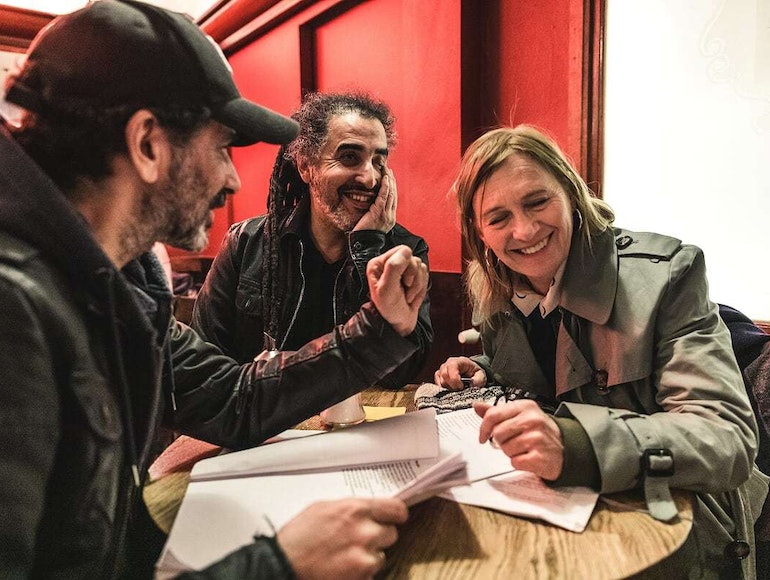 Action Zoo Humain also regularly takes the stage as artist in residence. Over the years they have performed the shows at NTGent: Amnes(t)ie, the spin-off Amnes(t)ia and also Dihya and Métisse. In the summer of 2021 they organised a last supper to celebrate the end of journalism. With the production Testament of a Journalist, host Hugo Camps said goodbye and opened his will. During the 21'-22' season they present Flemish Primitives where six young performers, together with director Chokri Ben Chikha, look for the new Flemish Master of tomorrow.

Action Zoo Humain is an independent, dynamic and committed theatre company. It focuses on artistic development and produces performances. It examines the extent to which theatre can intervene directly in reality without losing sight of its poetic potential and self-criticism. In this way, it increases the playability of society. The organisation uses the historical concept of the 'zoo humain' as an (investigative) instrument to question ethnic, religious, political and economic conflict zones.

Action Zoo Humain operates as a company that puts multi-voicedness and representation in the foreground. In this way, the organisation functions as a bridge builder between artists/academics, the artistic/social-artistic sector, new talent/experts and between individual artists and cultural houses. This is based on the conviction that an (artistic) project is not only justified by its own content, but also by the network in which the project is established.

In recent years, Action Zoo Humain has developed from an organisation around the course of maker/director Chokri Ben Chikha to a broader shared platform of new makers, with room for research and development. The different makers find themselves in a number of common ideas and strategies to make theatre that is fed by and focused on social reality.

Action Zoo Humain works locally and internationally, plays both large and small venues and also intervenes in the public space. It focuses on long-term projects but also reacts in real time to current events.