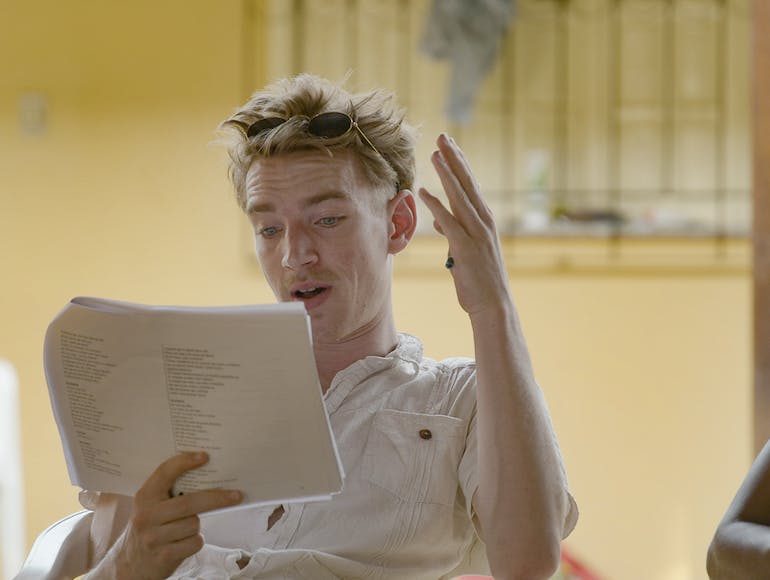 Arne De Tremerie (born 1992) graduated from KASK Drama in Ghent in 2020. He is currently performing in the production Grief and Beauty  by Milo Rau and NTGent, touring Belgium and abroad. In the past, he has appeared in Anatomy of Pain  by Lies Pauwels, No Coincidence, No story  by Berten Vanderbruggen and Siona Houthuys and Konijn met pruimen  by Laika, among others.

He is a member of the collective Camping Sunset and performed in Zomergasten, Happiness  and TEN OORLOG.  Arne has appeared in the feature films Coffee  (2016) and Bastaard  (2019) and in television series such as L'Aquila Grandi Speranze  (2018) and Black-out  (2020).

In Milo Rau’s play The Interrogation  (2021), Arne presents the monologue which runs throughout the piece affording him the following review by Pzazz: 'De Tremerie demonstrates a broad palette of acting styles: from small and honest to ironic and broadly theatrical (...) The Interrogation  thus became a particularly captivating performance with excellent acting and subtle direction.' The Interrogation  will soon be on tour in Belgium and abroad.

In November 2022, Arne will premiere his own project Baby, created and performed together with Eleonore Van Godtsenhoven. He will also release a new album with his band Outer  in the autumn.