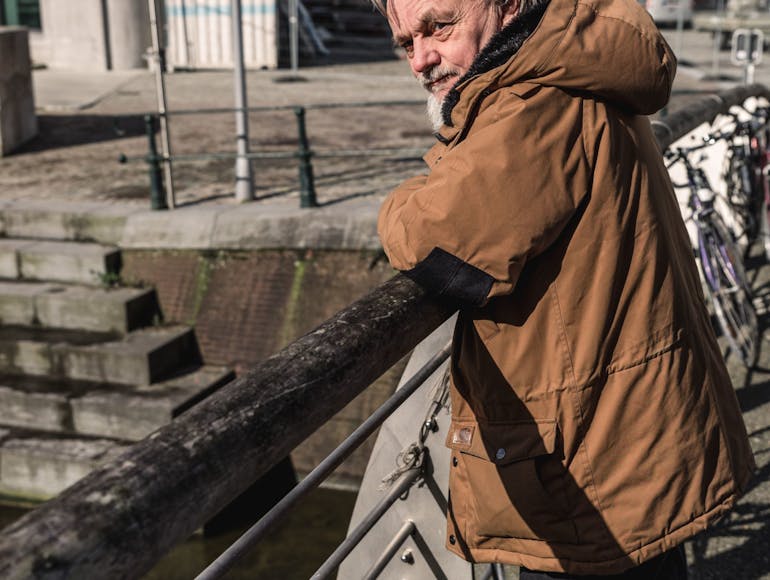 Bert Luppes (1955) studied at the Theater Academy in Maastricht and was one of the founders of the theatre group het Vervolg. His collaboration with director Johan Simons started in 1982. Since Theater Group Hollandia was founded in 1985 by artistic director/director Johan Simons and co-director/musician Paul Koek, Bert has been a permanent member of this company. He was in Boeren Sterven  (Farmers Dying), Prometheus, Stallerhof, Woyzeck, Leonce and Lena, Der Stein (The Stone), The Fall of Mussolini, Korbes, Kingcorn, De Bitterzoet  (The Bitter Sweet) and Vrijdag  (Friday), among others. Bert played the role of a factory worker in Kingcorn, a performance based on interviews directed by Floor Huygen, also in the film with the same title.  At het Onafhankelijk Toneel he was in several performances directed by Mirjam Koen. In 1991 he performed a young Platonov in Platonov.

In 2016 he had the same leading role, but as the older Platonov at NTGent, directed by Luk Perceval. He also performed with Het Toneelhuis (directed by Guy Cassiers), Carver (directed by Mirjam Koen) and Theater Artemis (directed by Floor Huygen). Since 2014 he has been teaching at the Maastricht Academy of Dramatic Arts. Bert can be seen in numerous feature films and television series.

In 2003 he received the Louis d’Or for his role of Georges Vermeersch in Friday (Hugo Claus), directed by Johan Simons. For his role in Who’s Afraid of Virginia Woolf?  (Edward Albee), directed by Mirjam Koen, he was nominated for the Louis d’Or in 2005. In September 2009 he won a second Louis d’Or for his role of Martin in The Goat or, who is Sylvia?  (Edward Albee), directed by Miriam Koen. In 2005 he received the Gouden Beeld (Golden Statue) for his “exceptional or striking contribution” to the film Droog  (Dry), broadcast on television by the KRO. In 2017, the VPRO series Alleen op de wereld  (Alone in the world) was nominated for an International Emmy Kids Award. Bert played the role of Vitalis in the series.

Since Bert joined NTGent, he has played the leading role in Platonov  (directed by Luk Perceval) and Cyrano  (directed by Julie Van Den Berghe). He was in Hotel Malaria  (text and directing by Peter Verhelst) and Früchte des Zorns  (The Grapes of Wrath) by Luk Perceval, a coproduction with Thalia Theater Hamburg. He was also in the marathon reading of Odysseus: a tramp comes home  (directed by Michael De Cock) and in both the German and Dutch versions of Kosmopolis  (directed by Johan Simons) and in Menuet  (directed by Liliane Brakema).

In the 2018-2019 season, Luppes worked on Orestes in Mosul, directed by Milo Rau. In the same season, he started a new collaboration with Luk Perceval. Luppes was one of the actors in Black, the first part of the trilogy The Sorrows of Belgium  that Perceval creates at NTGent. Luppes is also on stage in part two Yellow  (season 2019-2020) and in the final part Red  (season 2021-2022).