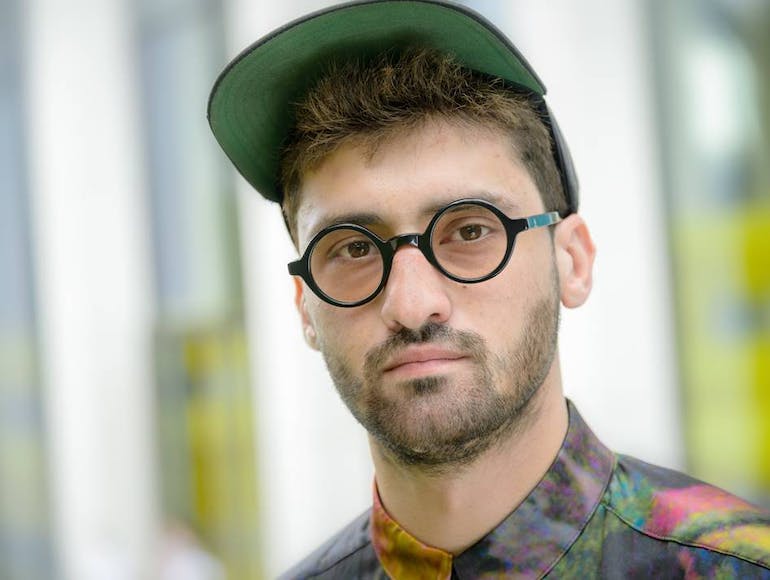 Ersan Mondtag was born in Berlin in 1987 and works between the fields of theatre and music, performance and installation.

He first worked with Thomas Langhoff, Frank Castorf and Claus Peymann, then assisted Vegard Vinge before joining the Otto Falckenberg School in Munich in 2011. He dropped out of his studies after two years and founded the "KAPITÆL ZWEI KOLEKTIF" in Munich in 2012. He conceived long-term performances, experimental party forms and interdisciplinary theatre works in the collective, most recently "Party #4 - NSU" in Mixed Munich Arts (MMA). For the exhibition space of the Pinakothek der Moderne he realized "KONKORDIA" with Olga Bach, a nine-day permanent performance.

About the performance "Party # 4 - NSU" (2015) Rita Argauer wrote in the Spex: "Once you have shaken off the shiver that the combination of party and NSU murders sends over your back, the events of Munich's Kapitæl Zwei Kolektifs around Ersan Mondtag conceal an interesting offer of newer pop culture: the documentary party. The performance troupe hits a kind of real-political club into the hedonism of nightlife without betraying the meaning of club culture. At the NSU party, the impact of reality turns into a horror cabinet. In Club Mixed Munich Arts, the court records of the NSU trial were turned into a play whose monstrous claim to reality was even more shocking in the context of the party. At the same time, the documentary party almost seems to be the only appropriate way to react when a corner further Beate Zschäpe no longer hears U2, but sits in the courtroom."

In 2015, his play TYRANNIS was created at the Staatstheater Kassel, with which Ersan Mondtag was invited to the Berliner Theatertreffen 2016. Further guest performances followed, among others again at the festival "radikal jung".

The specialist magazine "Theater Heute" named Mondtag "Young Director of the Year 2016" and he was also honoured in the categories "Stage Designer and Costume Designer of the Year".

His production DIE VERNICHTUNG (text: Olga Bach), which was produced at the Theater Bern, brought Mondtag the second Theatertreffen invitation in a row.

Ersan Mondtag lives in Berlin. He has staged productions at the Thalia Theater Hamburg, the Berliner Ensemble, the Maxim Gorki Theater, the Theater Bern, the Schauspiel Köln and the Münchner Kammerspiele.

Mondtag will also guest once again at Berlin's Maxim Gorki Theater (Wildes "Salome") and will stage "Die Räuber" at Schauspiel Köln. For the NTGent and the Kunstenfestival Ersan Mondtag creates the total artwork DE LIVING. Together with the Maxim Gorki Theater Berlin and the Wiener Festwochen, the world premiere of "Hass-Triptychon" by Sibylle Berg will be directed by Mondtag.