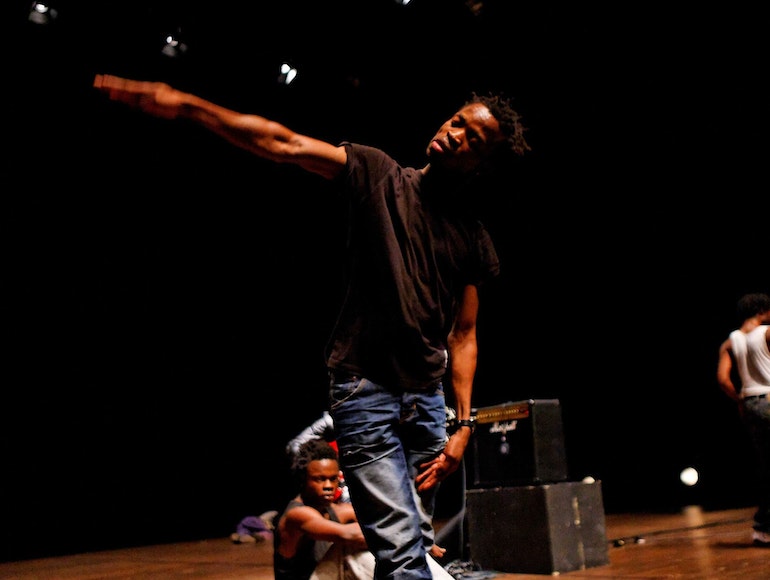 Dancer and choreographer Faustin Linyekula lives and works in Kisangani in the DR Congo. After studying literature and drama in Kisangani, he moved to Nairobi in 1993 and in 1997 with Opiyo Okach and Afrah Tenambergen set up the Gàara company, Kenya's first contemporary dance company. Their first creation, Cleansing, won a prize at the African Choreographic Encounters held in Luanda in 1998. In 2001 he felt a need to return to Zaire which by then had become the Democratic Republic of the Congo, a country torn apart by several years of bloody conflict, and a trip for a workshop scheduled to last a few weeks became a life choice. Faustin set up the Studios Kabako, an organisation for dance and visual theatre, "a place where people work, where you are always looking and sometimes you find, a place where you doubt but where some evenings certainty imposes itself".

Faustin Linyekula has created ten pieces with his company. In 2009, he created more more more... future, a rock-opera-ndombolo which has toured Europe as well as North America and Africa. In 2009 he gave a rare and wonderful performance himself in the duet Sans-titre with Raimund Hoghe. That year, he also proposed a production of Jean Racine's Bérénice for the Comédie Française and Pour en finir avec Bérénice was performed with six Congolese actors at the Festival d'Avignon in July 2010 and at the Théâtre National de Chaillot and the KVS theatre in Brussels in 2011. In 2007 he won the principal award of the Prince Claus Fund for Culture and Development.