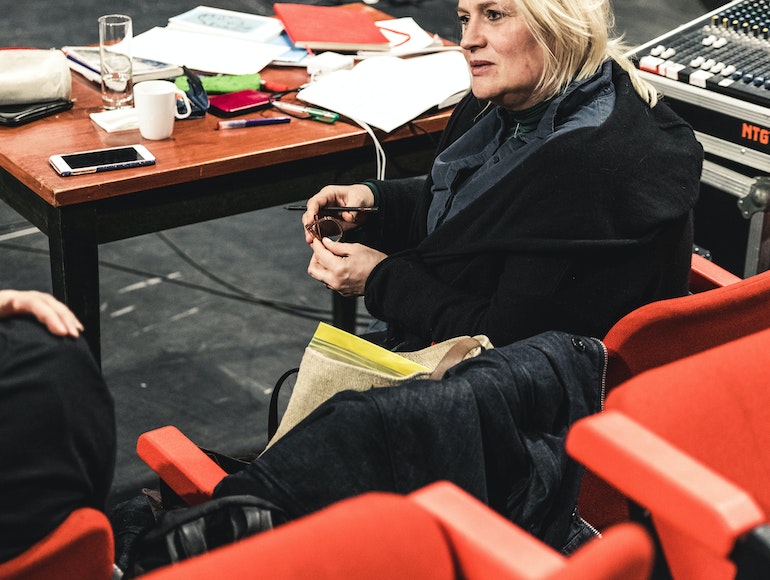 Lies Pauwels (1968, Ghent) is director and actress. She worked closely with Alain Platel and Arne Sierens, and had a role in the trilogy they made for Victoria (Ghent): Mother and Child, Bernadette and Allemaal Indiaan. Over the years she has acted in numerous Victoria productions: Wysiwyg, üBUNG, Poes Poes Poes, Aalst, A woman who has reached the horizon.

Since 2001, Lies Pauwels has focused mainly on creation. For all her performances she works to a large extent on the basis of improvisations, in a controlled way. Together with a group of friends, she created her directorial debut Club Astrid (2001) for Victoria, which immediately attracted international attention. An international breakthrough came with her second performance, White Star (2004), which was awarded the prize for best performance at the Kontakt International Festival in Torun (Poland, 2005). In 2007, Lies Pauwels responded to a request from the Manchester International Festival and Contact Theatre to cast and direct a performance in Manchester. This resulted in For all the wrong reasons, which went on tour throughout Europe and was also invited by the Singapore Arts Festival.

In the meantime, Lies Pauwels did a lot of coaching work (including for the Latrinité dance performances) and gave several workshops (including Kulturhuset Stockholm, Rote Fabrik Zurich, Espace des Arts Châlon-sur-Saone, Dublin). She also teaches at the RITCS in Brussels.

At the beginning of 2010, Lies Pauwels directed the self-made performance Caritas, two minutes of silence (Caritas. Dwie minty czisy) in Torun, Poland. In 2011 she plays as an actress in Freetown for the Dutch company Dood Paard and won the Columbina 2011 (prize for best contributing role). This performance toured as far as New York.

In 2011, at the request of the National Theatre of Scotland, she will also be directing an existing theatre play Knives in Hens by David Harrower for the first time. In 2012 she was invited for the second time by the National Theatre of Scotland to make My Shrinking life there. A performance based on the experiences of Alison Peebles as an MS patient. In her own country she made Laisse Tomber the same year for the KIP.

In August 2013, Lies Pauwels made the successful performance The Hamilton Complex at Hetpaleis (Antwerp). The performance was selected for the Theatre Festival and captured the hearts of the press and the public, resulting in 65 performances in eight different countries. Played by thirteen-year-old girls and a bodybuilder, The Hamilton complex was about the search for identity in a confusing, constantly changing world.

With Anatomy of Pain, a performance about chronic pain, at the initiative of our Public and Educational Department, Pauwels is a guest - for the first time - as a director in NTGent. For this production she works with people who have experienced, or are still experiencing, chronic pain. In the 2018-19 season she is also a guest director in Bochum, the German city theatre under the artistic direction of Johan Simons.