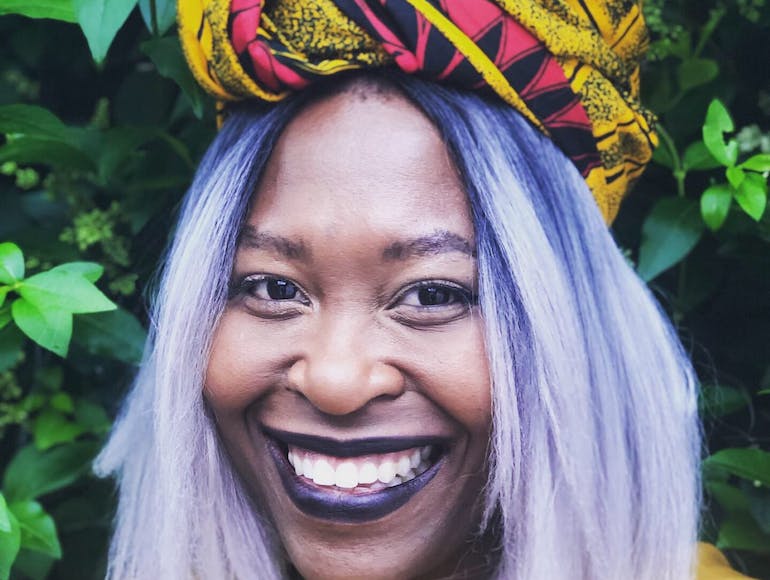 @aphrogesha
Lindah Leah will be seen in the NTGent production 'Killjoy Quiz' in the 2021-2022 season.

Lindah (1984) has had a fascination for language, history and mythology since her childhood. Studying Latin and Ancient Greek at secondary school became an obvious choice.

Lindah Leah then obtained a bachelor's degree in Applied Linguistics in Ghent and studied Journalism (option Audio-Visual Arts) in Brussels. In 2009 she won the HUB Poetry Prize (now Odisee).

Since 2013 she has been performing as a slam poet and spoken word artist. She has performed in the second edition of We Orchestrate Words by KVS x Brussels Jazz Orchestra, Afropolitan festival by BOZAR, Jazz 'n' Words by vzw TRILL, Gentse Feesten, Stand & Deliver, Zomerfabriek by Mama's Open Mic and Museumnacht S.M.A.K. In 2018 she toured with the Nederlandse Pooëziebus; a concept by Irene Siekman.

Lindah Leah was one of the women whose testimonies served as inspiration for the play Her(e) by Dalilla Hermans (2020 NTGent).

In 2021 she won the Belgian preselection of the international slam poetry competition of the Berlin-based organisation WICKED Projects. Currently, she combines assignments in education with performing arts and copywriting.

Lindah Leah made an English translation of the book Arthur Naeyaert, Schrik der Duitsers (2016 Jozef Vackier). She writes articles for Rekto:Verso and Etcetera. For Letterenhuis and Knack she wrote an essay entitled Beyond the shadow of the palm in the book Zwarte Bladzijden (2021 De Geus) edited by Sibo Rugwiza Kanobana (UGent) .

As a panelist and moderator, she thinks about decolonisation, gender-based violence, LGBTQIA+ issues and racism. She is also a regular panel member of Gloria Baffour's YouTube channel Unheard with Gigi. In 2021, she participated in the third episode of De Canonconversaties, a podcast about the canon of Dutch literature, presented by Anke Verschueren.

At the moment she is working on a literary series for Denderland TV entitled Wijs als Sijs.