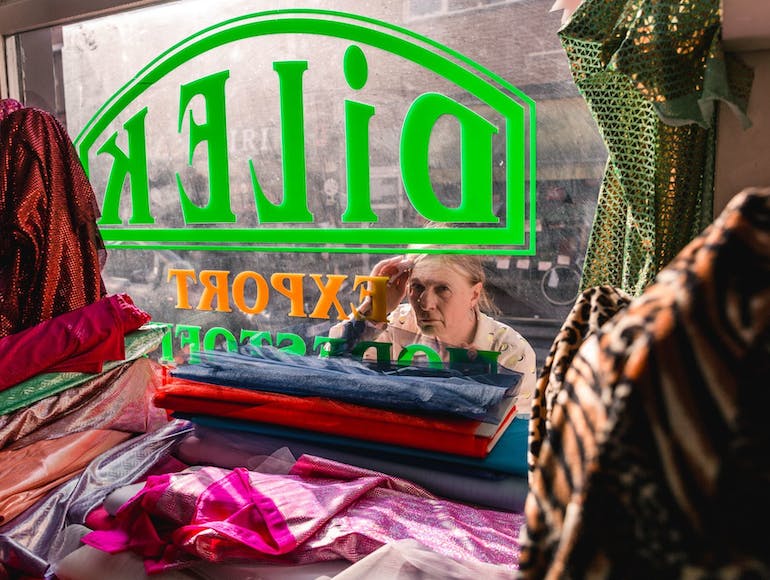 Marijke Pinoy, born 1958, studied drama at the Ghent Conservatory where she received "First Prize in Dramatic Art"' in 1985. She also completed internships at Jacques Lecoq (Paris) Grotowski (Liège) and the Method/Stanislavski (Brussels), among others. At the end of the 80s, she toured internationally with the movement theatre collective Pantarei. Marijke has performed in numerous theatre performances and worked for various companies, including Theater Zuidpool as an actress, director and as a member of the artistic team, De Werf, Arca, Theater Malpertuis, Cie Cecilia as co-founder and actress, FC Bergman, Action Zoo Humain and NTGent. In 2000 she also received the Velinx Audience Award as an actress for the monologue "Bouche B".

She directed the performance "Yerma vraagt een toefeling" ("Yerma asks for a beating") for music LOD. In 2006 she was a curator for Theater aan Zee (TAZ). "Achter 't eten" ("After the meal") (from Ceremonia, directed by Eric Devolder) received the Theatre Festival Prize in 2004 as the most interesting performance of the season. Marijke has performed at several major festivals - mostly with French productions - including Avignon, Paris, Lausanne, Reims, Lille and Berlin.

In addition to her work in the theatre, Marijke can also regularly be seen on the big screen. She has been on all kinds of television series and in films in recent years. She had a role in "Het gezin van Paemel" ("The van Paemel Family"), "Man van Staal" (Man of Steel), "Under influence" and "Een ander zijn geluk" ("Someone else’s happiness"), among others. She also played a leading role in "Vidange Perdue" ("The Only One"), "Ben X", "Au Cul du Loup" ("Miles from Anywhere") and "Elle ne pleure pas, elle chante" ("She is not crying, she is singing"). Recently she was in "Belgica" and "Problemski Hotel" and in "Soomer", a socio-artistic film by Victoria Deluxe. In recent years she has been on television in "De Smaak van de Keyser" ("The Taste of De Keyser"), "In Vlaamse Velden" ("In Flanders Fields"), "Red Sonja" and in the international series "The Team". Marijke teaches at the KASK - School of Arts - Ghent.

After earlier collaborations with NTGent for "Ginds, tussen de netels" ("Over there, between the nettles") and for "Woyzeck" (directed by Eric Devolder), Marijke has been a part of the cast of "Onderworpen" ("Submission") (based on the novel by Houellebecq) and of the diptych "Platform/Onderworpen", directed by Johan Simons and Chokri Ben Chikha since 2016-2017.

In the 2018-2019 season, she was part of the cast of Orestes in Mosul, the highly acclaimed play for which director Milo Rau, artistic leader of NTGent. For the creation of this play, Rau and his team travelled to Mosul to stage their version of the famous Greek tragedy.