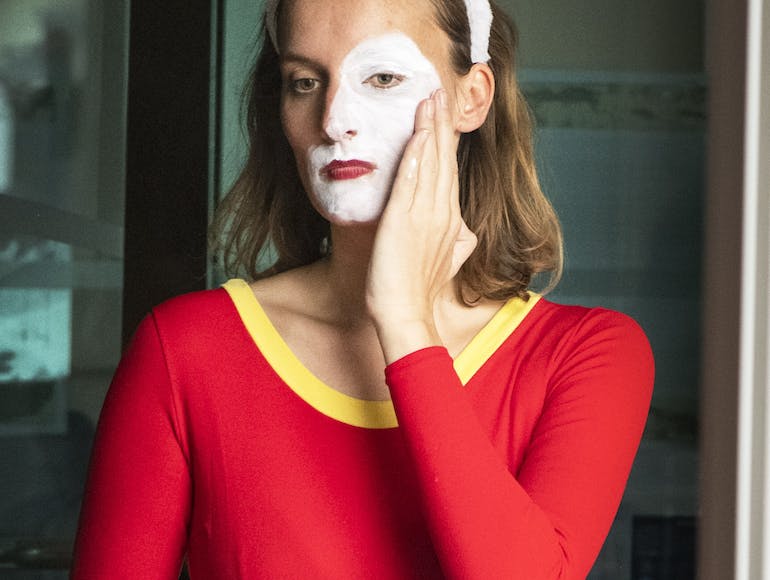 After an introduction in Philosophy at the University of Ghent Melissa Mabesoone (1988) studied visual arts at KASK School of Arts in Ghent. After her studies she moved to Amsterdam where she worked for Kunstverein Amsterdam a.o. on the play In:quest of Icarus at the Stedelijk Museum. In her artistic work Melissa was exploring the boundaries between the public and the private, the banal as political entity: in exhibitions or performative interventions at OT301 (Amsterdam), duo (Paris), Sale Dockx (Venice), M HKA (Antwerp), Verbeke Foundation (Kemzeke), among others. At the end of 2012 she founded the collective 'buren' together with Oshin Albrecht. Their work consists of performances, videos, texts, photos and installations. They navigate through themes as femininity, community, sexuality, living and neoliberal fantasies.  They made their first film Parkways during the BijlmAir residency in Amsterdam, did a postgraduate at the Hisk as a duo and published the book Confusion of Tongues with Posture Editions. Their latest performance Blue Skies Forever premiered at TAZ last summer. Their cross-over practice is shown in both a visual arts and theatre related context at STUK, Vooruit, Pukkelpop, Veem House for Performance, de Brakke Grond, Netwerk Aalst, Galery Am Polylog, Z33, Gouvernement, Buda, Beursschouwburg, Casco, Tatjana Pieters. She was the lead actress in the one-shot film Anonimity of the night by Assaf Gruber (2015), acted in Davis Freeman's play Fathers and sons (2014) and as a performer for Dora Garcia in On Reconciliation (2018). Since 2015 she works with Peter Aers on his conversational performances, as a performer in Against Interpretation (2015), and as a scenographer on Crime and Punishment (2017) and the Pain of Others (2018). Since 2018 she's envolved with Engagement, an organisation that battles sexism, sexual abuse and power abuse in the arts in Belgium. Autumn 2019 she will act in Lies Pauwels play Anatomy of Pain, produced by NT Gent.