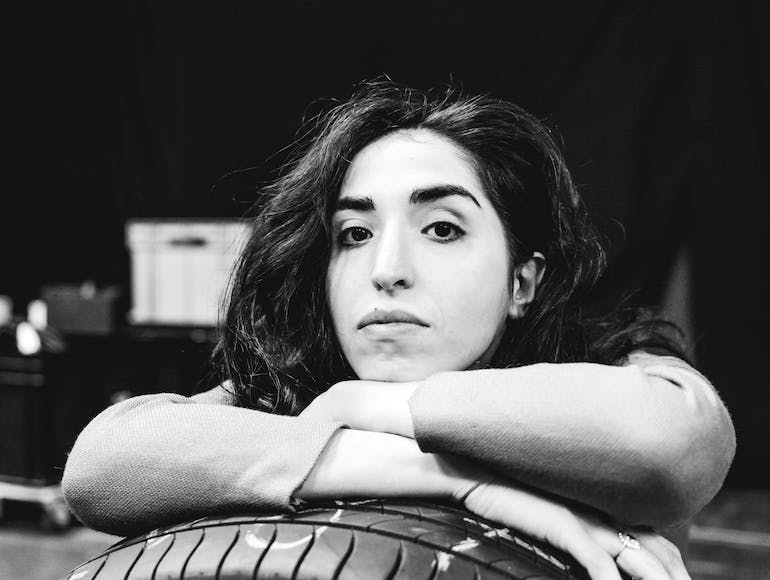 Susana AbdulMajid, born 1990, lives and works in Berlin. After her acting studies, she first performed street theatre across Germany, taught at the Goethe Institute and worked in various asylum centres, where she performed choirs in Arabic and German with women from Syria and Iraq - her own parents also come from Iraq.

In 2014 she worked with Thomas Bo Nilsson and Julian Wolf Eicke at the Schaubühne Berlin, followed by further engagements at the Schauspielhaus Wien (2016), the Schaubühne Berlin (2017) and the Berliner Ensemble (2018). She was also part of the collective Zentrum für Politische Schönheit from 2014 to 2016 and participated in numerous works and actions, including at the Maxim Gorki Theater Berlin. Susana is co-founder of the cultural format "Poetry Nights Berlin", where, together with the gallery owner Anahita Sadighi, she presents Near Eastern poetry with live music. She writes short texts and poetry and her first book "Babylon In Blau" will be published at the end of 2019.

In 2018 she starred in the film "JIBRIL" (Berlinale 18) by Henrika Kull, for which she was nominated for the Götz George Nachwuchspreis as best actress. Most recently she appeared with the Babylon Orchestra at HAU 1 in Berlin and at the Deutsche Oper Berlin as a dancer and actress directed by Anna Gehren. In addition to her theatre work, she studied cultural studies at the Free University of Berlin, specialising in Arabic literature and theatre.