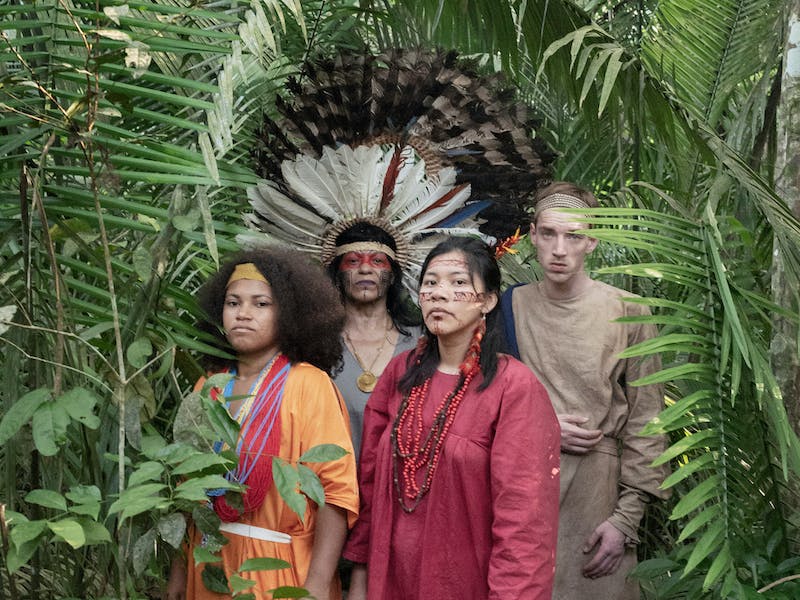 Finally, something to look forward to

| 30 November 2020
On March 11, 2021, we will start the season again with the digital premiere of 'Yellow' (Luk Perceval). The theater will remain open until the middle of August. We're eager to storm the stage, but we're also betting on live streams, recordings, documentaries, films and online and offline debates. Time to reveal our plans!

Grand Master and house director Luk Perceval's series The Sorrows of Belgium examines dark passages in Belgian history. In part two he examines the collaboration during the Second World War. The premiere can be followed live at ntgent.be. Afterwards it can also be seen in the theater!

The cosy predictability of a television quiz is giving room for much more spicy thinking. Luanda Casella will let your brain steam once more!

In the medieval satire Het Narrenship 100 lunatics are sailing to Narragonia while singing. In reality, mentally ill and disabled people were taken from the city to die on the open sea. The starting point for an outdoor performance by dancers with disabilities.

Milo Rau and his team travel to the Brazilian state of Pará, where the forests burn to make way for soy cultivation. Together with indigenous people, activists and actors from Brazil and Europe, he makes a political Antigone for the 21st century. The Brazilian premiere will be streamed live at ntgent.be. The theater version will premiere in our theater.

Gardenia descended 10 years ago into the turbulent lives of remarkable people, seemingly effortlessly walking the twilight zone between being male and female. An intimate account of hope and cherished or lost illusions. 10 years later the cast meets again. To shine, one more time.

In 2007, a whole family committed suicide in Calais: the parents and their two children. No motive was ever found. The farewell letter only said: 'We fucked up, sorry'.

Milo Rau filmed the eponymous play together with film production company Look@Leo and NTGent. "The silence before the storm, the cracks in this at first sight picture perfect family, the fear in the face of death: it works well on film, where we are close to their emotions". (De Standaard)

Milo Raus Jezusfilm starring activist Yvan Sagnet premiered at the Venice Film Festival and was warmly welcomed. The New Gospel is extremely effective. The film is a hammer stroke, intellectually as well as emotionally'. (Theaterkrant)

Grand Master Luk Perceval focuses on the collaboration with the Germans during the Second World War. The theatrical performance premieres online. But that it will not be an ordinary broadcast is already a fact.

ANTIGONE IN THE AMAZONE (film version and docu) | MILO RAU

For this theater performance Milo Rau and his team went to the ancient forests of Brazil. The performance will also premiere there. You can follow it live at ntgent.be. After that there will also be a documentary about the production.

This spring NTGENT ON TAPE became a great success. We selected a number of shows that you could revisit on the website. We are working further on the format and will keep you informed. In advance a sneak peek

NTGent resolutely goes for a new form of access to theater. We focus on film, linked to theater, and on the online distribution of our theater productions. In this way we ensure that we can continue to produce and present when corona makes public activities difficult. Because we believe that these new forms will also be post-corona stayers, we are anchoring these ambitions together with our international partners.

Since March, thinkers, activists and artists start talking to each other. Review conversations with Achille Mbembe on the 'paranoia of the Western mind', Chantal Mouffe (UK) and Nora Chipaumire (USA) on the question 'Why theatre?' and Ulrike Guérot (DU) and Srecko Horvat (HR) on the feeling of crisis in Europe.

We don't plan the first NTGent shows with an audience until April 1, but that doesn't mean it will remain quiet in the house in the meantime. If possible, NTGent will open its doors to initiatives and performances from other houses as early as January. In this way we want to support artists from all disciplines and give you, our audience, a heartfelt boost. We hope to be able to reveal more soon!

ANTIGONE IN THE AMAZON