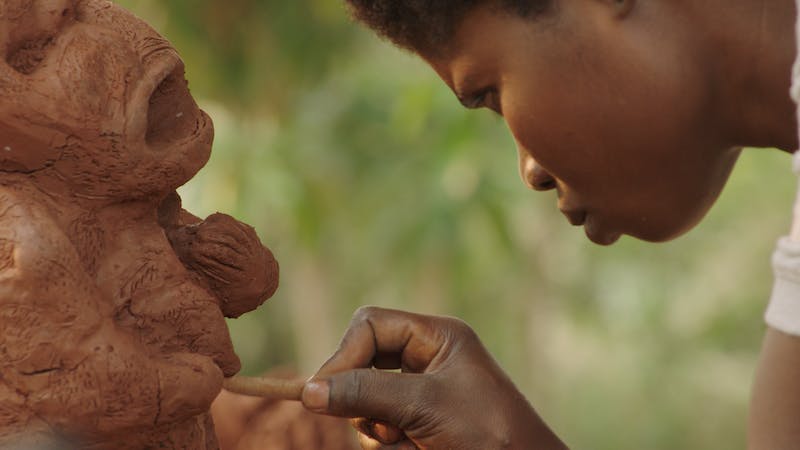 Lecture Bambi Ceuppens: ‘Art is a means of taking control of one’s own destiny’

| 7 October 2020
Congo is economically one of the poorest countries in the world, but artistically it punches above its weight in all possible disciplines, from dance and visual arts to film, fashion and comics, not to mention its music to which the whole of Sub-Saharan Africa dances. If this seems paradoxical, I propose that abject economic poverty and artistic creativity present themselves as two sides of the same coin, namely the Anthropocene or its Congolese variant, the Congocene, as Matthias De Groof (De Groof, 2020) calls it: the era in which global geology and ecology are changing as a result of human activities.

The Anthropocene resulted from the exploitation of nature and human beings within a global market economy from the end of the 15th century onwards. The import of millions of enslaved Africans into the Americas to cultivate monocultures on plantations (sugar, cotton, later tobacco) was at the root of the Industrial Revolution, which created a need for new raw materials and markets. That Revolution led to the Scramble for Africa, which in turn paved the way for a new phase in the harsh economic exploitation of Africans under European colonial occupation. From the beginning of the 16th century, the country now called the Democratic Republic of Congo was completely encapsulated in this system: people were transported as slaves from the west coast to both Americas, especially to South America and the Caribbean, and from the 19th century onwards from the east coast to Asia.

From 1885 to 1960, the whole of Congo was colonised, first by Leopold II, then by the Belgian state.

Meanwhile, whole regions spared from slave traders were integrated into the trade routes connected to one or even both slave routes. From 1885 to 1960, the whole of Congo was colonised, first by Leopold II, then by the Belgian state. This colonisation was particularly violent in the region where Irene Kanga lives. From 1901, the Compagnie du Kasai (CK), which had a monopoly on rubber exports, forced entire families to harvest rubber several times a month far from their villages, in order to pay taxes. Commercial agents used violence to collect the required quantities: they punished anyone with a whip, took women hostage, and if they were not satisfied with the quantity or quality of the rubber, they refused to pay and sometimes imposed fines in the form of more rubber or cattle. As a result, villagers hid young men, women and cattle in the forest. This, in turn, resulted in reprisals in which whole villages were burned down. When the CK lost its monopoly in 1909, the situation deteriorated due to fierce competition between different companies. The outbreak of sleeping sickness in 1916 was directly linked to forced labour, which weakened people’s health and immune system.

Meanwhile, the price of rubber on the international market started falling and by 1915 there was a switch from overexploitation of rubber to the construction of palm oil plantations. In 1911, Huileries du Congo belge (HCB), a subsidiary of Lever Brothers (now Unilever), expropriates land in Leverville (now Lusanga) for the establishment of the first and largest palm oil plantation in the southwest of Congo. Men are forced to harvest palm nuts for paltry wages, forcing them to pay the main tax to the colonial administration. The poor food and working conditions lead to great mortality. In the wake of the global economic crisis of 1930, wages are being cut and taxes increased. People begin to flee their villages to escape HCB recruiters. The latter force the men to return to work by taking women, children and old people hostage.

On 14 May 1931, Edouard Burnotte, a territorial agent, and Alphonse Vanhombeek, an HCB recruiter, arrive in the village of Kilamba to collect taxes. When the men refuse to work and flee, Burnotte has most of the women taken hostage and imprisoned and confiscates everything of value. Burnotte and Van Hombeek and other recruiters get drunk and rape several women, including Kafushi, the wife of a man called Matemo; she is raped by one Henri Collignon. After three days, the women are released. A few days later, Matemo confronts Collignon and asks him for compensation for the rape of his wife. Collignon refuses. Matemo gets a beating and Collignon submits a complaint about him to his superiors without informing them of the cause. In response, district officer Leonard Vaninthout sends territorial agent Maximilien Balot in order to investigate what has happened and to collect taxes.

On 8 June Balot arrives in Kilamba, accompanied by four soldiers and a messenger. They are greeted by a hostile crowd, which may confuse Balot with Burnotte. Burnotte already had a bad reputation for being responsible for the death of a young girl who drowned while his messengers plundered the village in which she lived. When Balot fails to spread the crowd by firing several shots into the air, he shoots a Congolese in the arm with a shotgun. In the ensuing fight, Balot is killed by Matemo.

​Balot’s widow will declare afterwards that she understands that her husband is less the victim of the Congolese insurgents than of an extremely dysfunctional, cruel and corrupt colonial system.

The colonial administration is not so clement: an estimated 500 to 1,000 people are killed in military reprisals. Many men are sentenced to death by a war tribunal, while others receive prison sentences.

A decade later, between 1942 and 1947, residents are again forced to harvest rubber as part of the so-called war effort (l‘effort de guerre’).

From the 1950s onwards, living conditions in the region have improved, but in the meantime the colonial government has completely disrupted and changed the cultural, economic, political and social system.

Pende, the name of the ethnic group to which most of the inhabitants in the region belong, is artistically known for its masquerades that are all-round spectacles. The American anthropologist Zoë Strother (Strother, 1998) shows that during the colonial period, Pende created masks that referred specifically to the colonial context, and that the violence and poverty that characterized large parts of their colonial history lead to result in an artistic boom,with, among other things, including the rebirth of masquerades from the 1940s onwards:

As the colonial government replaced legitimate political leaders with straw men, dancing offered young men who refused to collaborate with the colonial administration a unique way for gaining prestige and excelling within their own society. When everything disappears, there is nothing left more, all that remains is culture.

The Congolese author André Yoka Lye Mudaba describes the contemporary art boom in his country as a means to resist: “We have lost everything: we no longer have either economic power or political power. We have lost our family ties and we no longer know what our stated values are. Only artistic activity allows people to express something together and it acts as a lifebuoy, giving a meaning to one's existence...” (De Boeck & Van Synghel, 2005, 202). This analysis applies to almost all art works produced by Congolese since the colonial period, including those by Irene Kanga and her colleagues of the Cercle d’Art des Travailleurs de Plantation Congolaise (CATPC):

Congolese artists create art in an attempt to understand, grasp and control the world in which they live.

Let me be clear: the close relationship in Congo over the last 500 years between the exploitation of people and nature on the one hand and artistic prosperity on the other should not lead us to conclude that economic and ecologic exploitation is the price we have to pay for artistic excellence.

We urgently need to move away from the persistent notion that culture and art are a luxury that people can only afford once they can live in fairly comfortable conditions.

Recently, the Congolese author Sinzo Aanza wrote on Facebook: “Without culture, Congo is nothing but a mine” (Facebook, 19 May 2020). He might as well have written: “Without culture, Congolese are not human.” Culture is what makes people human. Irene Kanga reminds us that at least since Leopold II's reign, the economic exploitation and has been accompanied by the rape of Congolese women have gone hand in hand in Congo at least since Leopold II’s reign. Through her work of art, she reminds us not only of Congolese victims, but also, and not in the least, of the many Congolese who, like her, do not want to be reduced to mere victims. In the midst of physical and mental devastation, people need not only bare necessities for physical survival, but also, and above all, artistic creativity: art is a means of taking control of one’s own destiny and maintaining one’s human dignity, even and perhaps especially when living in the most degrading circumstances.