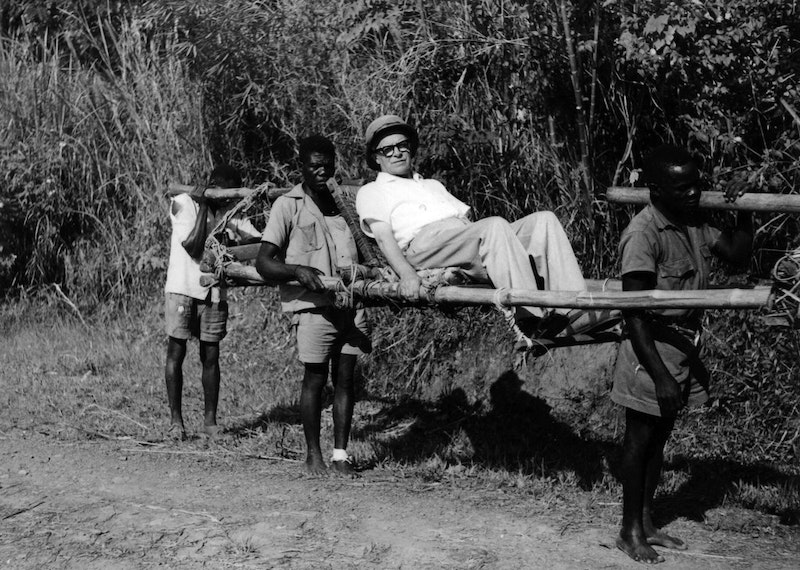 | 8 March 2019
If even the first citizen of the land, the king, doesn't want/can/may/may excuse himself, then I want to do so, and I hope many Belgians will do it together with me. My very personal and sincere apologies to the whole African continent.

When, in the 1960s, I went as a little boy with my father to watch football in our highest division, I was struck by the humiliating jungle sounds that where produced against the first Congolese footballers. My father called them ‘black pearls’ – with their daring and talent they gave color and creativity to the often boring ‘Raymond Goethals’ football (the name of a Belgian trainer, red.). At that time, there was also a Congolese salesman walking around in the stands – he probably stayed in Belgium after the World Fair in Brussels of 1958. He wore a white waiter’s coat and a bowl on his head with packages of homemade lakrids, black candy. With his very distinctive voice he shouted: “Lakelakelakelakelak!” The people in the stadium enjoyed imitating him with monkey sounds. How humiliating must it be, both for those Congolese footballers and for that candy seller, to be addressed by Belgians as a baboon, I thought. In a country that has committed an unprecedented mass murder.

The same feeling of shame struck me last week, when I saw the images of the UN envoy urging Belgium to apologize for what happened in the Congo. The fact that someone has to come from abroad to remind us of our moral duty is, at the very least, very painful. How is it possible that these apologies were not made much earlier? How on earth is it possible that schoolchildren still have so little knowledge of what happened in the Congo? How is it possible that there are still statues in Belgium referring to the ‘glorious leader’ Leopold II? A king who, measured by the bloodshed he caused, comes close to Stalin, Hitler, Mao and Pol Pot? Yet there isn’t any Belgian who thinks it would be more than appropriate, out of respect for the millions of victims, to remove his proud statue from the dike in Ostend.

Currently I work with a cast of Belgian and Afro-European actresses and actors on Black. This play is the first part of the trilogy The Sorrows of Belgium and focuses on the dark history about Belgian Congo and the Free State. Looking at the multitude of content and archive material we draw from, it’s clear that we Belgians provided us with a good alibi. By placing our collective guilt on Leopold II, we can close our eyes to all those Belgians who carried out the orders from Brussels with ruthless violence. Assuming that the colored fellow man is not a human being, but a ‘wild’ person who could only be ‘civilized’ by force.

Over the past eighteen years, I have lived and worked in Germany, and I have experienced how the Germans almost daily ask themselves the question of the Warum?. Questions that not only reflect on the system that Adolf Hitler installed, but also on the rücksichtslosigkeit with which the executors of that system started their murderous assignments. The most exemplary house fathers earned good money with these degrading jobs. This history is constantly being explained in schools, in order to make the young people aware of the lack of awareness. Unfortunately, racist choirs are also a phenomenon in the Bundesliga. Something that is happening everywhere today – in Italy, teams are punished for the racist choirs of their supporters and then have to play in front of an empty stadium.

But, also in Belgium, stadiums are marred by stupid racism. The proof of how little historical awareness there is, how little the average Belgian is aware of the atrocities in the Congo, a country that still suffers from the looting of the past.

In Black, we follow the trail of William Henry Sheppard, one of the first African-American missionaries to go to the Congo on a mission, witnessing the violence perpetrated by the Force Publique. On his return to America, he ended his lectures with the words: “As a man of God, ladies and gentlemen, sent to Africa to spread the word of Jesus and the sacrifices he made for humanity, I returned with a sense of shame to our beloved country. How can we really believe in the Almighty? How can we face Him in our prayers, knowing what happened in His name?”

That is also what strikes me as a Belgian, when I hear that UN say that it is high time that Belgium apologizes for what happened in the Congo: a feeling of shame. Even the fact that there is a discussion throughout the country as to whether or not we should apologize... It’s downright shameful.

For the past twenty years, I have been abroad as a guest worker and an immigrant. Recently I came back to live in Belgium, I wanted to be with my family. Once again, I’ve experienced what it feels like to be Belgian. That unique feeling of shame, a feeling that is deeply rooted in this country. And if even the first citizen of the land, the king, doesn't want/can/may/may excuse himself, then I want to do so, and I hope many Belgians will do it together with me. My very personal and sincere apologies to the whole African continent. Bow.

BLACK - A JOURNEY INTO EUROPE'S HEART OF DARKNESS: CONGO