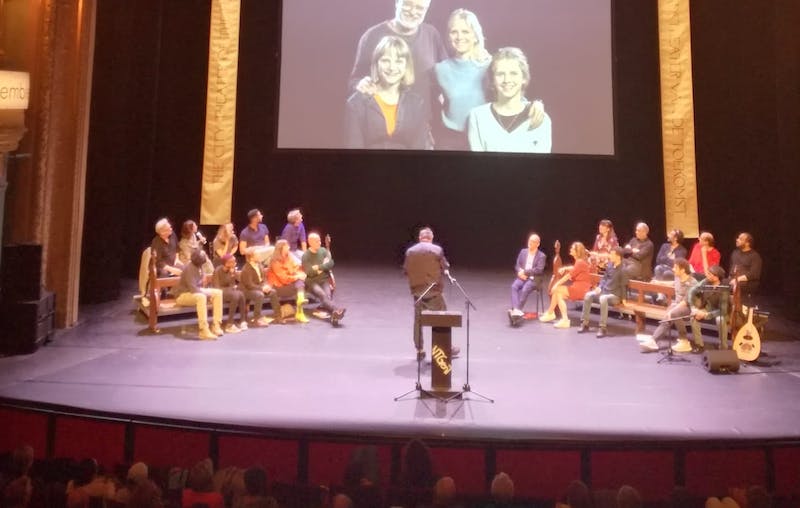 | 23 May 2019
On the eve of his second season as artistic director at NTGent, Milo Rau has warm words for our audience!

A year ago, I promised to learn Flemish. I have to admit that I did not succeed as well as I thought. And I have to say: all of you here are to blame! The reason is that everyone here in Ghent is so cosmopolitan and speaks English, German or French so well. Try leading a theatre in Paris or Warsaw or my hometown Zurich without speaking the language: people would simply not understand you. But in Belgium everybody does. Or thinks so.

The second reason lies in our theatre itself, NTGent, the City Theatre of the Future. In Orestes in Mosul alone four different languages are spoken, in our entire "global ensemble" almost 10. In all productions and guest performances of the current season together, you can even count almost 15 languages. The language of sheep, dogs and birds not included - in Ersan Mondtag's production De Living, which is at this very moment shown in our partner theatre Théâtre National in Brussels, a bird is on stage.

But fun facts aside. Because I want to thank you for that: for your openness, your cosmopolitanism. In none of the many countries to which I have travelled the past 20 years, I have found such an open, critical but relaxed audience. If I had dissolved a long-established ensemble in Germany to create a global ensemble, I would have been chased out of the city. Here everyone said, the audience, the critics, the ensemble itself: Let's try it! Because how are we supposed to create new, diverse, global classics without a global ensemble? And today we have an ensemble of over 25 artists from all backgrounds, professionals and non-professionals, including the entire former ensemble of NTGent and even a sheep.

Or another example: If an artistic director in, let’s say, France had invited a Jihadist - and in the end the mother of a Jihadist - to the stage, the ministry of culture would have possibly dissolved his contract. Here in Ghent, in Flanders we were told: "That's not very sensitive, Milo, but please explain to us why you want to do that?“ And then we continued working together and created, together with the citizens of Ghent, The Ghent Altarpiece.

'In none of the many countries to which I have travelled the past 20 years, I have found such an open, critical but relaxed audience.'

A year ago, we were united in this same Schouwburg, under renovation at that moment, and we announced: "Next year, Ghent will be everywhere, and everybody will be in Ghent". And that’s what happened. In our first season, our productions travelled all over the world, and the whole world came to Ghent. A total of 7 new productions of NTGent and 41 guest performances could be seen in the venues of NTGent in the last months - with a total of 42,000 spectators and an average load factor of over 80 percent, which is a record for this house. Outside of Ghent, NTGent productions - I'm just talking about our 7 own new ones and co-productions - played a total of 126 shows in 17 different countries with 38,000 viewers, from Adelaide in Australia to Utrecht in Holland and from Taiwan to Maasmechelen (I hope I pronounced it right). This spring alone we were on the road with NTGent productions on all 5 continents. In numerous countries - including Italy, Germany, Switzerland and the US - our productions were selected in critic’s polls the best of the year.

Newspapers like Le Monde, the Süddeutsche Zeitung, The Guardian or the New York Times became regulars at the Sint Baafsplein. "NTGent makes Ghent the centre of Europe," wrote a critic from Switzerland a few weeks ago, and an English critic added: "Ghent could be the place to look at in the following years and from which you can learn if you want to produce and present challenging, tirelessly curious and above all citizen-oriented works and face up to your historical past." The Ghent Manifesto was hotly debated all the way to China, Brazil and Russia, and on the occasion of the performances of Orestes in Mosul in Bochum, a German critic wrote a few days ago: "The Ghent city theatre - which combines stage play and reality with the unconditional will to enlighten - is as influential for contemporary theatre as Lars von Trier's dogma films once were for film".

In short: We did everything as we had announced exactly one year ago. On behalf of the entire NTGent team, I would like to thank you for following us on this path - critically, intelligently, humanly. Because this is not self-evident, for a city and its city theatre, it’s revolutionary. Revolutionary and yet human, that's what we want to be in the coming season, too, our second season, the season 19/20. Again, we want to be utopian and critical, again we want to look into the past and the future with our productions. Another year we not only want to describe the world from Ghent, with Ghent and for Ghent, but also to change it a little - as the Ghent Manifesto says in its first commandment.

Family of Man: This will be the motto of our second season, and that was also the name of a legendary photo exhibition that opened in 1955 at the Museum of Modern Art in New York and then toured the world. The aim of the exhibition which became the most visited in art history, was to show the entire world, all mankind as a family, a community with common fears and hopes. This is also what we at NTGent have been trying to do since we reopened the theatre 8 months ago with Lam Gods: using theatre as a stage on which the whole world can appear. Because whether we like it or not, humanity has a common destiny: climate change, migration or data flows do not end at borders. Not at the language border, not at the border of Flanders, Belgium or Europe. Not even at the borders of our own species.

But isn't talking about "family" sentimental? Isn't it another form of colonialism? Is every universalism not restricting, as every family – let’s be honest – restricts its members? The problem already lies within the word, doesn’t it: Family of Man –“man“, which in English means "mankind" as well as "male". Who belongs to this "family"? The exhibition, 60 years ago, showed all cultures, ages, jobs as one community, people of the mercy of the same laws of love, life and work - and yet, each and everyone being completely different. What about today? How can we see humankind as a family - and not underestimate the power of cultural, biographical, ideological, historical differences? How can we be different, but solidary? And above all: Who should tell the stories of our common family? And in what way?

Like last year, we want to tackle this question with a program that couldn't be more diverse: new classics for a new era. The productions and artists will, like in the last season, come to Ghent from all continents and backgrounds to revisit the concept of a Family of Man, create their own and new vision of it and present it to you. Because if the world is a village, a city, then every village and every city can become the whole world. As in the current season, also in the coming season and years the world will continue coming to Ghent and Ghent will travel to the whole world. The theatre we do, tries to be universal, but every piece and every voice in it will remain different. Yes, because this is theatre: being as different we can, but solidary. Whoever we are, our stage is the same.

We welcome you to see all the performances, during the weekends but also on weekdays. We welcome you to travel together with us the world. But above all, we would like to welcome you to our debates and discussions. Because being a “family“ doesn’t only mean telling each other stories, but also making history together. Theatre is a celebration, but can also mean quarrels and confrontations. Just like in every family.

Thank you so much for being here!