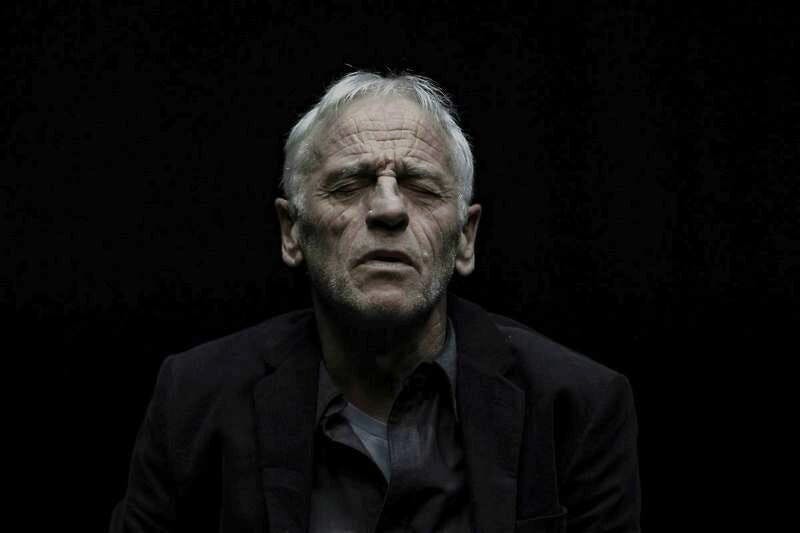 Beckett a rich source for the work of Kris Verdonck

| 13 March 2022
In the spring of 2022, the performance 'ACT' by Kris Verdonck will be performed at NTGent. It is based on the work of Samuel Beckett. Read more about the famous author here.

Samuel Beckett (1906-1989) is one the most important writers of the twentieth century. He wrote novels, short stories, poems as well as work for theatre, radio and television. With Waiting for Godot, he extended the boundaries of what is considered to be theater – beyond the classical story, beyond meaningful actions.

An aspect of Beckett that is less known, is his fascination for the possibilities harbored by the new media of his time. His radio plays and pieces for television (like Eh, Joe and Quad) were experiments with these particular media and the machine accompanying them. This again had an influence on his theatre work, just think about the split monologue between a man and the recordings of his memories in Krapp’s last tape. Language itself did not stay unaffected by these new technologies: the seemingly random chain of words in Ping may very well be the first literary reaction to the computer. Beckett explored the dark depths of the eliminated human being, the homeless, the bum, the dying, the ill. After his death, the technology that fascinated him so much, generated a whole new class of people that has been put aside, discarded: replaced by machines, this ‘useless class’ will only expand.

In Beckett, we not only find a search for the new possible forms emerging out of new technologies, he also looked at the latter’s psychological impact. The loneliness and depression, but also the madness and violence of a high-tech commercial environment, became central elements in Beckett, especially in the later works. In this sense, he is still an important point of reference when it comes to the current state of being of humanity, thirty years after his death. Beckett’s characters – if that is still how one should call them – are in state of deadlock. They are stuck in their reasoning, in their memories, in pas decisions, but also: in the desire to just live a day without the fundamental and paralyzing doubt that haunts them.

For Beckett the famous phrase I think, therefore I am is a description of the Sisyphean meanderings of his characters as well as of his writing. What do our emotions and desires still mean, now that they have become commodified, and also predictable and manipulable? The vain urge to find meaning and sense in a senseless and cruel world, lead to an impasse in which only repetition, attempts, to keep on trying, are what remains. In theatre, this resulted in a very strict form, in which the actors said their text in a machinic way, and in which the movements and timings where meticulously fixed.

The minimal theatre forms and the ways in which he reduces the actor to an object, make Beckett a rich source for the work of Kris Verdonck. Beckett’s body of work has been accompanying his work for years. Huminid, for example, is a seemingly holographic projection of Johan Leysen, based on Beckett’s Lessness. IN was an installation inspired by Company. Since 2018, Verdonck works on a four-year practical and dramaturgical research into the intersections between Beckett and Japanese Noh theatre. How do they give shape to the relation between the human and the machine, to a state of being between presence and absence – central questions throughout all of Verdonck’s installations, choreographies and performances?

ABOUT 'STORIES AND TEXTS FOR NOTHING'

Between 1946 and 1952, Beckett worked on three novellas and thirteen short prose pieces. These were published together as Stories and Texts for Nothing. These form the basis for this Beckett evening, titled ACT. The three novellas, The expelled, The calmative and The end, all deal with an older man leaving his usual habitat, looking for a new place for himself. To stay, to live, to exist. In the thirteen-part Texts for Nothing, an older man also appears to be the central figure. However, where the novellas are about attempts to a movement outwards, these fragments turn inwards. The Texts for Nothing are a turning point in Beckett’s oeuvre: in them, the last remains of a narrative dissolve (there is no need for a story, it reads in text IV). What remains, are beautiful, dark and deep struggles of a writer, a thinker, an eternal doubter that can’t go on, because he is not sure what happened yesterday and nevertheless is inevitably determined by it. There is doubt between light and dark, between speaking and remaining silent, between life and death, hope and despair, between looking for and letting of a story. Doubt that has no resolution, because it is always a bit of both.