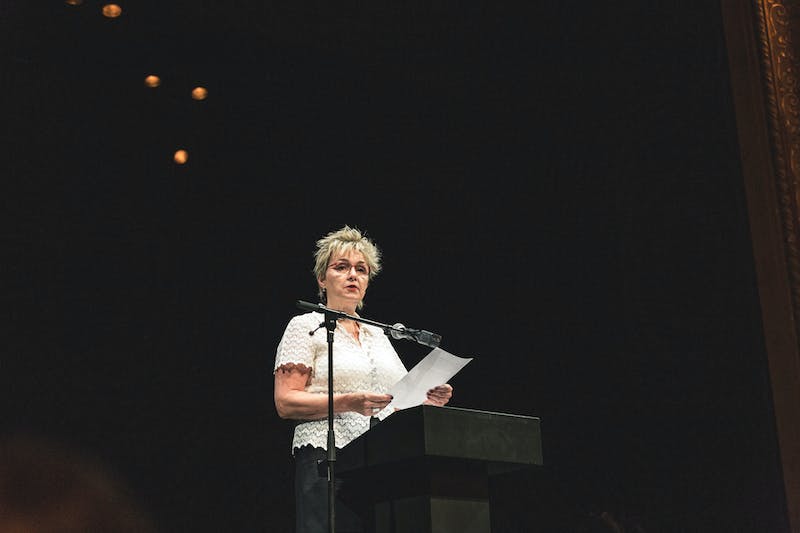 | 2 October 2018
Wallonian journalist and opinion maker Béatrice Delvaux gave a brilliant speech at the beginning of our opening weekend.

It feels good to be here this evening.

Because I am a journalist in the presence of creative people and artists.
Because I am a French-speaker in the theatre of a Flemish city.
Because I am a worker of today, on the stage of a City Theatre of the Future.
Because I have been gifted this opportunity to say thank you to Flanders for a culture that has so often dazzled and consoled me, as an editor-in-chief, as a journalist, and as a human being.

Because this is the first day of the Ghent phase of the Milo Rau saga, I said to myself, with a striking lack of modesty, that I would structure my contribution “Milo-style”. Starting, that is, from real characters and events in order to try to highlight the advantages, from a creative point of view, of mixing origins, languages, and genres – as well as the powerful and undeniable nature of the shared cause and destiny that connect us journalists, on the one hand, and you artists and theatre people, on the other.

I do believe very strongly that, in the choices we make and the new work we create, we are soldiers on the same “mission”, which Hannah Arendt summed up in these words: “In your fight against the world, give the world a helping hand. For, to educate the world, you must love it.”

So let us start with reality, as our raw material.
In 2007, Belgium was prey to confrontations between the communities, between Flemings and French-speakers. A television programme, Bye Bye Belgium, broadcast by the RTBF, the French-language public broadcasting service, shocked the south of the country, which, for nearly an hour, believed that Flanders had just declared its independence. It was fiction, but it still haunts people’s minds today.
A newspaper in the north of the country, De Standaard, was particularly indignant at the way Flemings were perceived by the French-language press. In an article published with a title in French, “Nous en avons marre” – “We’ve had enough” – the editor-in-chief of the time wrote that “the Flemings are fed up of being seen as racists, separatists, and fascists.”
That’s when the journalists at Le Soir saw red. Ah! So they’re fed up! Well, so are we… So they hit back with a “Letter to our Flemish Friends”, which appeared on page one of their paper, in which they pointed out that French-speakers, for their part, had had enough of being seen as lazy, monolingual, and unwilling to relocate.
That might have been the end of the story. But the two papers decided not to lower themselves and their profession to an exchange of vengeful editorials. Instead, they would do something that would legitimise journalists and make them credible: throwing light on the present, recounting the past, exploring the facts, revealing truths and lies, elucidating and offering material for thought and for looking ahead. Using all the means at our disposal and, above all, doing something regarded as unthinkable: merging our forces. For once, we were going to take on this journey together, journalists from the north with journalists from the south.
The “North-South Confrontation” was born: two months of joint work, with the two editorial teams mixed, four weeks of completely shared publication, with even the logos of the two papers interwoven. Cross-interviews with Flemish and French-speaking artists; tackling thorny issues such as the justice system, social security, and the budget: everything was explored – and not just in terms of politics. Short, humorous videos – the memes of the time – on the Internet featured “Jan and Jean” on a tour of Belgian clichés. I remember one in which Jean, who obviously can’t talk Dutch, gets on a bus here in Ghent and speaks to the passengers in French, thanking them “for going to work every morning, while I stay in bed.”
Analysing the conflict between the communities was tough: there was a great risk of over-simplification and there were plenty of harsh political accusations. But working together, which made each see the other’s reality, made a great and highly relevant contribution to the way we approached our Belgian reality. We did our work better, more solidly, more productively. We had fun. Above all, we were less alone. We had discovered “brothers in arms” on “the other side”.

And we went on to discover more.
For, almost at the same moment, two theatres were doing the same thing in Brussels. The KVS and the Théâtre National had decided to launch “Toernee generale”: a number of weeks of programming, in which they exchanged plays and artists, with everything surtitled in the other’s language. A new world opened up to audiences from the two communities.
Our journalistic investigations as a Flemish-French-speaking duo automatically brought us into contact with this theatrical initiative, which stimulated and, above all, encouraged us. In a political climate dominated by confrontation, in which language was first and foremost a question of power, domination, and resentment, in which we were used to demonising the other, journalists and theatre people were forging links, breaking through borders, building bridges, and making “common cause”. This was not in the least about saving Belgium, but about preserving our humanity through our ability to live together. By reviving and sustaining curiosity, complexity, and an interest in and a capacity to enjoy the other.
And it was really enjoyable, and incredibly interesting. For those who read and watched, for those who wrote and acted, and for those who published and produced.

What was done for north-south relations has been done many times since, in relation to migration, women’s rights, euthanasia, the future of the Congo, the issues at stake in local, regional, and federal elections, the freedom of the press, the place of religion in society, the future of Europe, and other subjects. North-south dialogues and exchanges have become established as basic to our work, while the theatres have become, for us journalists, like a page, a supplement, an indispensable edition of our newspapers.

Journalists and actors, journalists and authors, journalists and stage directors are soldiers in the same combats, paddlers in the same canoe. Inexhaustibly concerned with understanding the real state of affairs, but also people’s private lives, equally fascinated by the world’s upheavals and the emotions of the actors and witnesses of our time. Like the contemporary artists described by the philosopher Giorgio Agamben: “Only those can claim to be contemporary who refuse to be blinded by the lights of the century and manage to perceive their dark side, their unadorned, private side. The contemporary is the person who sees the darkness of his time as something that is his business and never ceases to question it. And that is why being contemporary is, above all, a matter of courage.”

When I step into a theatre, I have the impression of entering into another home, another newsroom. Astounding your audience/readers, making them discover what they don’t know or don’t want to know, putting them in contact with the other they don’t know or don’t want to know, whether Fleming, French-speaker, black, Arab, jihadi, mother of jihadis, homosexual, transgender, poor, or banker. Making them realise and feel that they are also actors, in the world and in their own lives; showing them that things are not always that simple, and that they too could be villains, murderers, or suicide bombers.
So I do believe in the merits of Milo Rau’s commandments for the theatre, which are a series of recommendations that could also apply to how we operate in the media: mixing languages and people, introducing content taken from reality, opening up our production process to our readers, being obliged to produce content that is our own, original, and new, and having the capacity to go and make the paper where it is needed, with some kit in a small van. We also share the same difficulty and the same challenge: that of being able to speak to everyone, not just to a few, finding “people” wherever they are, at home, starting in their cities, here in Ghent, but also in Brussels, Liège, Antwerp, Namur, Mons, and elsewhere. Or where they are at war, or in their schools or their “camps”.

I see, and I saw, newspapers and theatres as members of a relay team. When the first runners have finished their stretch and are tired, disappointed, or at a loss, things aren’t so bad, as the second lot take over, with different strengths and energies. The journalist shows reality, but the pen or the image are often not enough or are no longer enough. The theatre then becomes the other site of “current affairs”, making it possible to see better, more intimately, in ways that are more transgressive, more disturbing, and more challenging. I have come to realise this many times, at many different performances. With Milo Rau, it was in relation to the Dutroux case, as the issues and emotions involved gripped us on the stage with an unprecedented emotional force and urgency. And again, in relation to the Congo: our special correspondent had criss-crossed the country over the years, allowing its inhabitants to have their say and castigating its rulers, but it was the theatre that went beyond those on-the-ground investigations by offering the plundered country a trial, as a kind of modest reparation. The special correspondent had prepared the way for the stage director, and the stage director provided the reporter with a new editorial forum.
The journalist who goes to the theatre is shaken, or emerges consoled, or with his or her batteries recharged. How many times have I found myself straightening my shoulders and lifting up my head at the end of a performance, inspired by the powerful indignation or the ideas projected from the stage. How many times in recent months, my strength sapped by a darkening world, worn down by the force of hate, have I been heartened anew by seeing that, in the theatre, despite everything, people have kept alive what Cynthia Fleury calls “the concern for the rule of law, as the concern for oneself”.
Our times are dark times! We find ourselves faced with populism, racism, and anti-Semitism.
“Today is only one day in all the days that will ever be. But what will happen in all the other days that ever come can depend on what you do today.” That statement by Hemingway is incredibly demanding, but it describes the imperious necessity of fighting, for every day counts. As a journalist, I will only have that courage over the months ahead because I am not alone and because, in particular, you, stage directors, writers, and artists, are there alongside me, close by, and you are not giving up.

Milo Rau wants to change the world with his theatre. Some find that presumptuous and see him as a megalomaniac. Me, I think it is the only fuel that is effective for the road in front of us. And that it is our responsibility.

We will need to be brave.

- spoken by Béatrice Delvaux on Sept 28th, before the premiere of Lam Gods at the start of our opening weekend in NTGent
translation: Martin McGarry