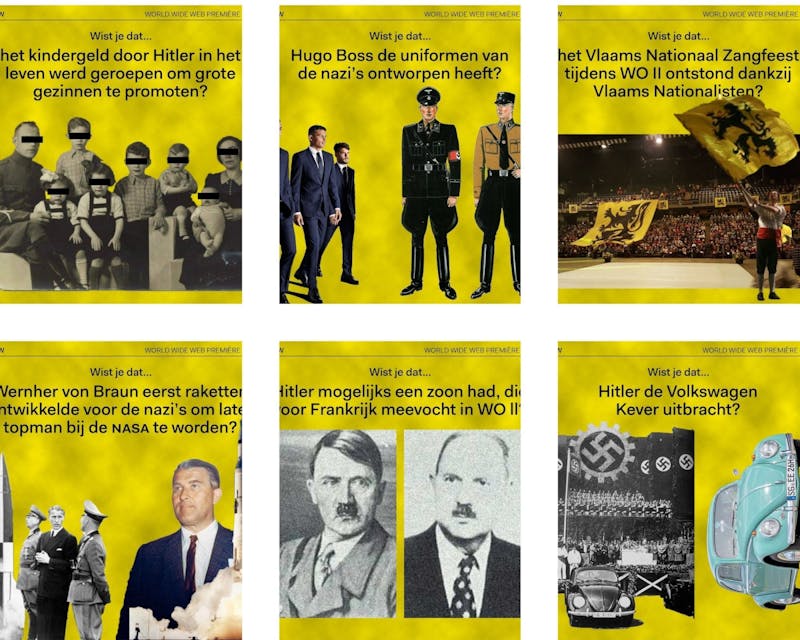 | 24 February 2021
11 March is the online première of Yellow: The Sorrows of Belgium ll: REX. We will be diving into history with Luk Perceval. Every day, we will release a meme about Hitler and the Nazi regime on our channels. You will find some background information below. 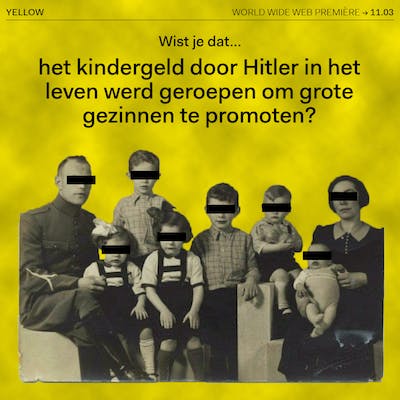 On 1 January 1941, the Germans introduced the child benefit law: all working people received child benefits for their third child and any subsequent children under the age of fifteen.

When the Germans occupied the Netherlands, they introduced more and more laws and regulations. Most of these laws were immediately abolished after the Second World War, but a few are still in force today. For example, we still use Central European Time, most children get their swimming certificates, we all have obligatory health insurance and parents have received child benefits for growing children since 1 January 1941.

FREE MONEY BECAUSE YOU HAVE CHILDREN – WHO WOULD REFUSE?

There had already been plans to introduce child benefits before the war, but the law was definitively introduced under Hitler’s regime. In the first years of the occupation, German policy was aimed at winning voluntary support for Germany among the Dutch people, and clearly the child benefit law was an excellent element of that strategy. Free money because you have children – who would refuse?

The idea of child benefits corresponded perfectly to the German ideal of a large family with a lot of children. After all, Hitler wanted to populate his recently conquered territories in Eastern Europe with Aryan citizens, and they had to be produced by German  women. In the 1930s, the Nazis introduced various measures to motivate German married couples to have as many children as possible. Thousands of women were fired to make room for unemployed men; Nazi propaganda advised women not to lose too much weight on the grounds that it would adversely affect their fertility and mothers of more than four children received the ‘Cross of Honour of the German Mother’. In 1933, the German government introduced a bizarre form of child benefit: Aryan married couples could borrow 1000 Reichsmark from the State and for every child they had after that, 25 per cent of this amount was written off. The Child Benefit Law was changed after the war. Now everyone, including self-employed and unemployed people, received benefits for every child, including the first and second children. 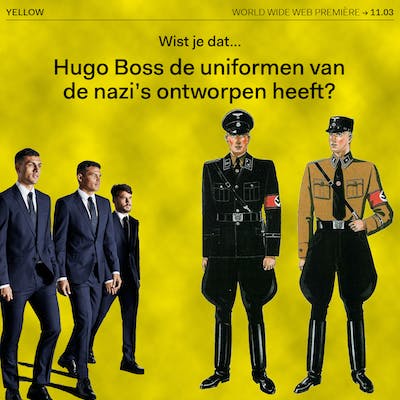 Did you know... Hugo Boss designed the Nazi uniforms?

Really? Maybe this is something to think about next time you want to buy something from the brand.

Research has shown that the founder of Hugo Boss, Hugo Ferdinand Boss, was a firm supporter of the National Socialist regime.

Boss joined the NSDAP in 1931. At that point he supplied uniforms to the party. Production of this clothing led to a steep increase in revenue for Boss in 1940. He even accepted an order from the Waffen-SS as late as the beginning of 1945. Hugo Boss was among the small and medium-sized companies involved in the highly decentralised production of uniforms.

Because it was difficult to find workers for the clothing manufacturing industry, women from Poland worked as forced labour at Hugo Boss from 1940 onwards. According to the forced labourers, Boss was not a bad employer, but he wasn’t a good one either.

After the Second World War, Hugo F Boss was first categorised as an offender, subject to a fine of 100,000 Reichsmark, the second highest penalty. On appeal, Hugo F Boss’ involvement was reduced to the category of ‘follower’. 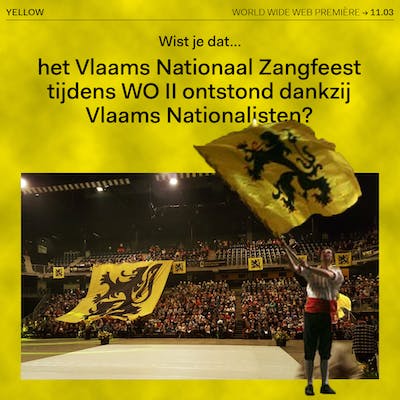 No, actually we’re pulling your leg. Sorry about that. The Song Festival was first held in 1933!

The Flemish National Song Festival is held every spring at the Sportpaleis in Antwerp or (since 2009) at the Lotto Arena. It is organised by the General Dutch Singing Association to promote music in Dutch.

The first 'Vlaamsch Nationaal Zangfeest' was organised by Willem De Meyer (secretary) and Karel Peeters (chairman), and was held on 9 June 1933 at the Handelsbeurs in Antwerp. An extensive ‘Honorary Board’ was inaugurated, chaired by Dr. August Borms. The singing, accompanied by brass bands, was conducted by Jef Van Hoof.

The eighth song festival was cancelled because of the war. The song festivals during the occupation mainly had military music and marching songs on the programme, and were infused with an atmosphere of cultural collaboration. After 1944, the situation had changed so much that all activities were cancelled. Poets and publicists collaborated in all of the song festivals. Prominent Flemish nationalists gave speeches, often with a highly polemic bent: Herman Vos (1933), August Borms (1934), Floris van der Mueren (1935 and 1951), Father Jules Callewaert (1936), Jozef Muls (1937), Robert van Roosbroeck (1938), Cyriel Verschaeve (1939), Wies Moens (1941 and 1943), Filip de Pillecyn and Hendrik Elias (1942).