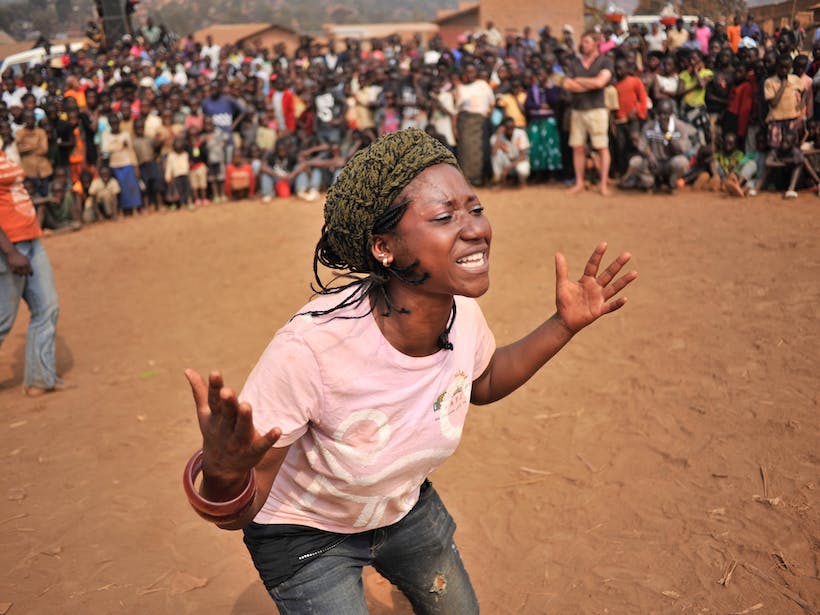 Past summer, the Brussels theatre maker and artistic director of Théâtre & Réconciliation,  Frédérique Lecomte, travelled to Goma, accompanied by nine Belgian actors, among them KVS-face Valentijn Dhaenens. Goma is situated in East-Congo, a territory rich in resources, which has been badly affected by war violence for years, wars for which innumerable child soldiers were recruited. There, Lecomte creates theatre with, by and for local communities.

The goal of their journey? To get the Belgian actors out of their comfort zone and bring them into contact with the environment and experience of their co-actors and ex-child soldiers. An encounter and artistic collaboration between worlds that are literally and figuratively wide apart. Together they made a touching and at the same time humorous show about the way that people from different continents, each shaped by their own context and history, approach and experience the conflictual reality.

The actors convey the sometimes rough themes and experiences in a surprisingly lighthearted fashion, often in their own mother tongue (Kirundi, Swahili, Dutch or French). Furthermore Lecomte wields a daring directorial approach: live during the show, the performed scenes are arranged into a definitive dramaturgical development, taken into account what is going on in the moment, in the interaction between the stage and the audience. Short scenes in rapid succession at a sharp pace, so every performance is different.

Vita Siyo Muchezo Ya Watoto was performed 7 times in Goma and surroundings, in the open air, for an audience of hundreds of bystanders. This time Frédérique brings the show to Brussels. Is it possible to do the same in a completely different context?