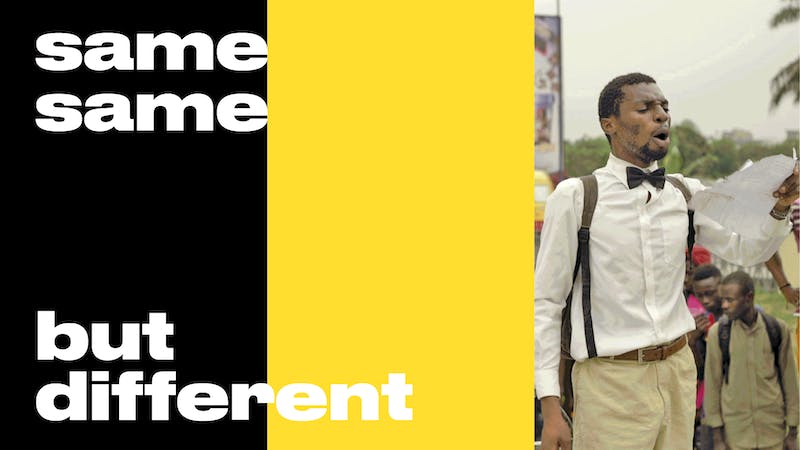 | 24 January 2019
The arts festival Same Same But Different aims to talk about subjects as decolonisation and white privilege. But what does that mean actually? You'll read it in our glossary!

Cultural appropriation occurs when a cultural group adopts elements of the symbols and culture of another group by its power or domination and adapts them to reinforce or accentuate its own identity. Cultural appropriation should not be confused with cultural exchange, which takes place on the basis of equivalence. An example would be the use of an iconic photo of the Black Panther movement on a poster for a New Year party.

Colonisation uprooted and oppressed large groups of people and stole their resources. In addition to material wealth, a wealth of history, scientific insights, philosophy, art and literature was lost or marginalised. The notion of modernity positioned the West as superior to other, ‘primitive’ communities and thereby gave legitimacy to (neo-)colonial practices in the guise of a development project. Decolonisation is the umbrella term for the ways people gradually redress these imbalances, ranging from a struggle for independence to challenging contemporary racism and the psychological and mental healing of the people on whom it has weighed.

Institutional racism refers to the deep, unconscious and structural forms that racism has assumed in various areas of society, from the mass media to the labour market. Its historical roots lie in slavery, colonisation and associating the term ‘race’ with whiteness and blackness.

This means subtly hostile behaviour linked in this context to someone’s racial or ethnic background. Micro-aggression rarely occurs consciously, but can range from irritating to hurtful. It is exemplified by such expressions as ‘Where do you come from originally?’, ‘You speak very good English!’, ‘If I use the n-word it’s meant ironically, so it’s no problem!’ The sting is rarely in the remarks themselves, more in the worldview that lies behind them: the implied assumptions regarding people of colour.

White privilege refers to a set of automatic and sometimes conscious advantages provided by having white skin: knowing that you will see people like yourself on the screen, that they will be portrayed positively, that history lessons will be relevant to your community, that no one will keep an eye on you in shops, that you will not be confronted with racial discrimination on the rental and labour markets, and that you can talk in public without ‘speaking for your own community’ – or even that you will be heard and understood as an individual with an opinion.

White people often experience a sense of guilt about racism in society. Since they are rarely confronted with racial tension – in the West we live in a predominantly white society – this feeling may turn into emotion and an excessive focus on the self. Emotional reactions may occur especially in conversations where one is confronted with the scale and complexity of the problem and the built-in injustice that accompanies it: ‘How sad it makes me’ and ‘I don’t share in any of the guilt’ rather than ‘what has to happen and what can I do?’

White innocence is the conviction that discrimination is not tolerated in our society. Whiteness and the West are after all associated with progressive values, tolerance, equality of opportunity and freedom of expression. A side effect of this is that discrimination is acknowledged only with difficulty even when it is proven. The unequal representation and voice of people of colour in public debate is a blind spot; there is an inability to recognise that racism is a fundamental part of Western societies. This is sustained by a lack of coloured voices in public debate. It is a vicious circle of innocence.

The white saviour is a self-confirming and narcissistic narrative pattern in which people of colour in or originating from nonWestern societies are saved from perilous situations by white people. It can be seen in such films as ‘Cry Freedom’, ‘Mississippi Burning’ and even ‘12 Years a Slave’ (Brad Pitt saves the day!). Also in Instagram shots of white NGO volunteers surrounded by photogenic African children. Closer to home, we associate it with the fact that it is above all white men who tend to speak out against Muslim women’s headscarves, without knowing what the women themselves think.