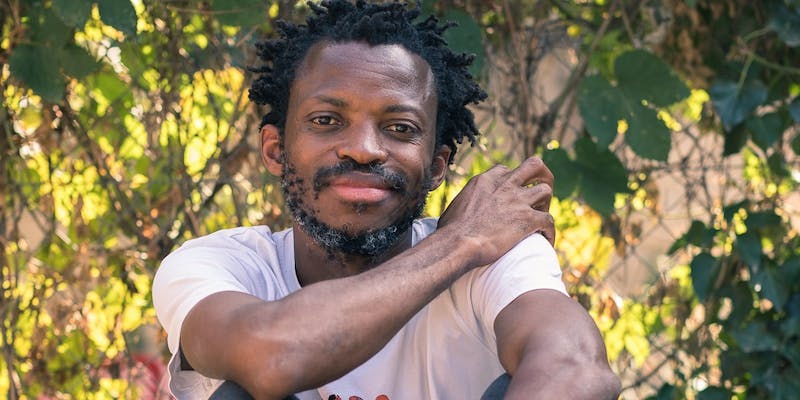 | 24 september 2018
Together with his soul mate, Hlengiwe Lushaba, a South African singer and one of the strongest voices on the continent, renowned Congolese dancer and choreographer Faustin Linyekula created Not Another Diva, a dashing masterpiece that examines our common perception of the concept of a diva through a harmonious mishmash of dance and music. After spending the summer in his hometown Kisangani — where his Studios Kabako is based — to work on Not Another Diva, Linyekula found a little gap in his full-packed schedule to give us some insight in how it is to work as a performer in the Congo and to discuss the origins of his new piece.

How is it to be a performer in a city like Kisangani?

In the Congo, people don’t come to my shows because of my references to the history of dance. They care about the experience and the energy you share with them

I suppose it isn’t easy anywhere in the world, but the context in the Congo makes it more complex. My colleagues in Brussels can depend on existing infrastructures helping them to develop their work. In Kisangani, you need to create your own framework and as there’s no dance school you have to train your performers yourselves. This gives you extra work, though at the same time it’s an advantage as the infrastructure is tailored to your needs and you can polish your performers through a training matching your requirements. Concerning the content, I can somehow show whatever I want because the government simply doesn’t care. The only thing they care about is their power and whoever threatens it will get killed or arrested. So as an artist it’s important to develop forms that protect you. I believe poetry is always a step ahead of censorship. By using the most poetic form, I’m able to tackle political subjects and that’s the only way to survive.

Do you think that there are certain differences between the audience in your hometown and audiences in Europe?

When you create something, the ambition is to invent your own language. Whether I’m in Kisangani or Ghent, I’m speaking a foreign language. So it’s a question of translating this language to the audience. In the Congo, people don’t come to my shows because of my references to the history of dance. They care about the experience and the energy you share with them. In Europe, you can fool the audience with fluffy quotes. Navigating between these two audiences offers me the best of both worlds. I need to think about the energy ànd the references in my work.

How did Not Another Diva came into being?

The project started with Hlengiwe Lushaba’s wish to record an album in our studio, but I wanted to stage it, so we’ve put together a team of artists whose work we are inspired by. We started to reflect on the figure of the diva and I called the performance Not Another Diva. When you think of a diva there’s something tragic about her. Let’s take Miriam Makeba, the famous South African singer, who gave so much to the South African people in the struggle against apartheid. But what did she get in return? She had to knock for her life until she literally died on stage. If the only way to be a diva is to get all your energy sucked out and get nothing in return, then I don’t want women to be another diva. The other dreadful thing about divas is that they’re often torn apart from their families as they belong to the spotlight and the public.

So, you want to re-humanise and re-dignify the diva with this performance?

we want to show a different kind of diva, a diva who stays grounded and in touch with daily reality

Exactly, how can women be divas yet still stay connected with their families and the everyday life? We reflected upon which kind of diva this could be. Maybe a diva that performs in backyards, where the people live. Not Another Diva aims to bring the diva back to the backyard, back to her people, back to her roots. It’s not about the glitter and glamour, we want to show a different kind of diva, a diva who stays grounded and in touch with daily reality. As an artist SLASH diva myself, I want to be part of my community and not float above it. Of course I’m enjoying the media attention around my work, but I’m always thinking about how I could use it to get things moving.

You’re applying the term diva to yourself. Does the performance also question the man as a diva or is it strictly related to women?

Sure, there are male divas who’re treated in the same way. But being a woman and a star makes things even more complicated. Everywhere in the world and on the African continent in particular, being a woman isn’t an easy thing. I even dare to say that it’s the most difficult role or job in the world. How can I as a man work with women while taking into account that they have to face all those disadvantages? Can I be sensitive to that knowing that I could never be in a woman’s shoes? How aware am I of these injustices and what can I do? Am I ready to take responsibility?

Are you saying that it’s more difficult to be a female diva in African countries?

Our percussionist, Huguette Tolinga, is from Kinshasa and in the Congo, a woman playing percussion is exceptional because it’s a male dominated space. Being a high level female percussionist should bring a lot of respect, yet people would say: ‘This woman is like a man.’ They imply that it’s not good for a woman to be powerful. Our society prefers submissive women. It takes a lot of power to step up, to occupy that space and to be a leader.

There are only three women on stage, but they’re all mountain movers. They’re so powerful that the four male performers who surround them don’t take away their energy. This performance is a sort of celebration of these women’s power, an ode to the knowledge that being powerful isn’t contradictory to being beautiful. Often, people in traditional societies are scared of powerful women because they don’t equal power with beauty or delicacy. ‘Not Another Diva’ is an attempt to create space for the power of these women as much as for their beauty and fragility. Arts cannot the change a whole society, but it can change individuals and that’s the first part. It’s about opening the space, inviting people to come in and hoping that they would be touched and would start a new journey.