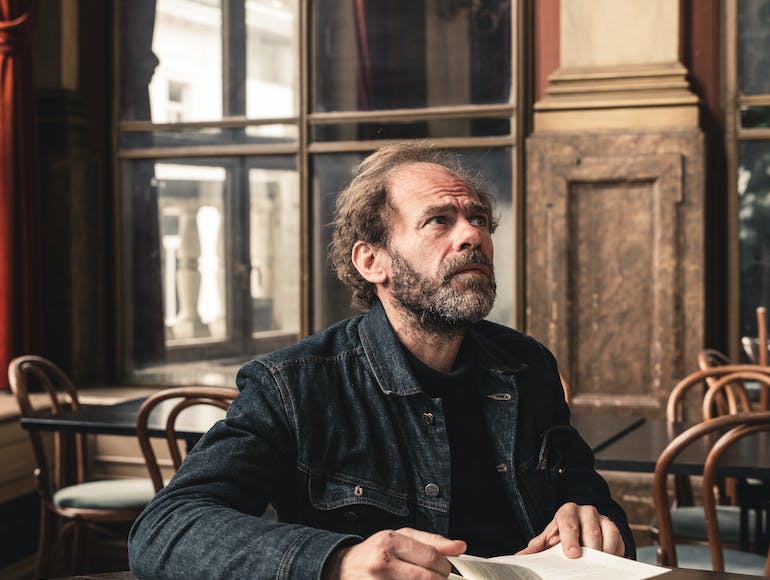 Koen De Sutter is a Flemish actor and director. In 1990 he graduated from the acting school at Studio Herman Teirlinck. Since the 1990s he has played with various theatre companies such as Het Gevolg, Theater Zuidpool, Arca (Ghent), Theater Antigone and NTGent. Important roles at the beginning of his career included Hendrik V by Shakespeare and Thuis by Claus. In 1996 he started to combine his work as an actor with that as a director. His directorial debut was with the piece Onder het melkwoud by Dylan Thomas. At the South Pole he directed Anna Blume hat ein Vogel by Kurt Schwitters, De invreter by Jeroen Olyslaegers, Kussenman by Martin McDonagh and several pieces by Arne Sierens. From 2001 to 2006 he was artistic director of Theater Zuidpool, where he continued acting and directing.

In 2006 and 2007 De Sutter travelled through Flanders with the monologue Martens (a production by NTGent and Theater Antigone, with a text by Bart Meuleman), in which the life of the Belgian ex-premier Wilfried Martens was discussed. In the same period, Koen De Sutter was artist-in-residence at LOD. Since then he has worked as an actor and director for Theater Zuidpool, Ensemble Leporello and Theaterproductiehuis Zeelandia-Zeeland. In 2007 he directed De Dikke van Dale and in 2009 he made a location theatre project for the same festival together with actor Jan Decleir: Onder het melkwoud.