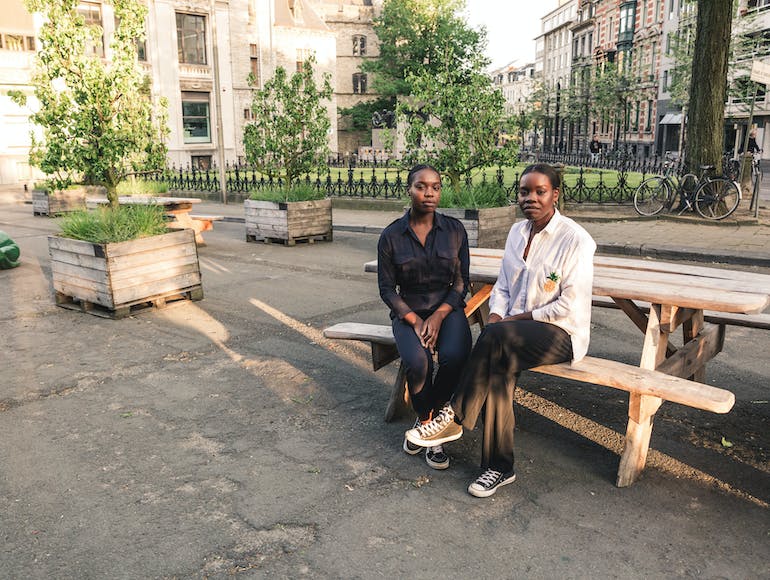 Doris Bokongo Nkumu & Nathalie Bokongo Nkumu, Les Mybalés, started their dance career in 2010 at the Gare du Luxembourg in Brussels. The twin sisters trained with well-known dancers from the hip-hop scene in Brussels: Baloo, hip-hop dancer and choreographer of The Cage, Zach Swagga, dancer and choreographer specialized in house music, and many others. Looking for experience, they participated in battles, such as Juste Debout in Amsterdam and Paris. In 2012, Zach Swagga spotted the duo and introduced them to house culture and the creative sector. From then on, Nathalie and Doris wanted to create shows. They turned to the not-for-profit association Lezarts Urbains, which integrated them into the European project 7Steps. In this context, they did a residency with the French choreographer Marion Motin and created their first performance of 12 minutes.  During the first performance at the Festival Lezarts Urbains 2014, the audience plunged into the world of the two sisters who, thanks to their connection, their exchanges and their stage presence transmitted energy and emotions. This show was inspired by their mutual understanding and their strong personalities. This is an instinctive dance that uses typical hip hop language and has African influences, in which we recognize the mark of Marion Motin. This show, later titled "Illusion", aroused the interest of professionals and was shown at renowned festivals in Europe from 2014 to 2017: Kalypso and Karavel Festivals in France, B.Supreme Festival in London, Spin Off Festival in Amsterdam, Lezarts Urbains Festival and XS Festival in Brussels.

Following this show, Les Mybalés were invited for several collaborations: with Rodolphe Coster, musician Ben Furi, Belgian dancer and choreographer, as well as with director Junior Mthombeni for the show "Malcolm X" and Belgian rapper Badi.
In 2017, on the occasion of the Afropolitan Festival in Bozar, they decided to launch a new creation, which they will present for the first time in 2018-2019 at the Maison Folie de Mons and at KVS as associated artists. In 2018-2019 they will perform in De Living, a new creation of German director Ersan Mondtag for NTGent.