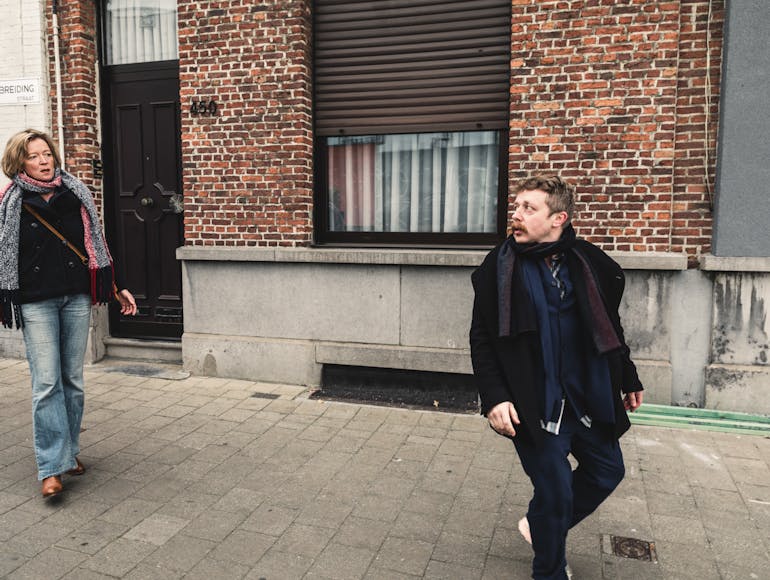 Louis van der Waal, born in 1979 in Rotterdam, from a French mother and a Dutch father, graduated from Studio Herman Teirlinck in 2003. Worked for Toneelhuis, Antigone, Schaubühne Berlin, NNT, Eisbär, De Warme Winkel, Collegium Vocale en Transparant, Stichting Showmachine and Abattoir Ferme. Many of them directed by Sarah Moeremans and writer/director Joachim Robbrecht. Recently he played in the four Crashtest Ibsen performances and What's in a fairytale series Robin Hood and Bambi at Toneelgroep Oostpool, of which the series will end next year with de Rattenvanger. With the company UNM he made 7 years of location performances and in 2015 he started an artist collective Ferdnnd with musician Mauro Pawlowski. He has previously appeared in Canvas series Duts and Clinch and films Miss Homeless by Daniel Lambo and De Patrick by Tim Mielants. Together with his wife Charlien Adriaenssens, he is active as an organiser of performance art events under the name Contemporary Glory Contemporary Cash, with which they have performed several times in Kinshasa in Congo and together with artist Eddy Ekete started a cultural house called 'Ndaku ya la vie est belle'. Earlier this year, they made an sf film with young people at SMAK in Ghent.