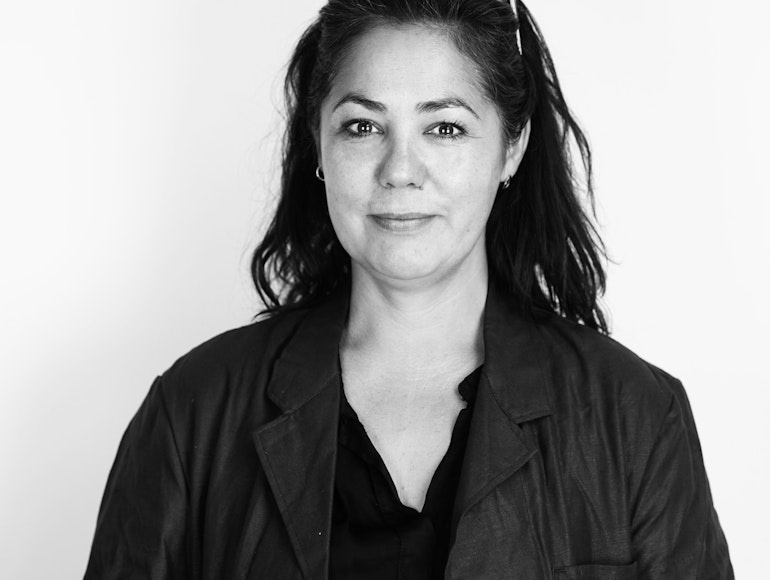 Dahlia Pessemiers-Benamar (°1975) graduated from Studio Herman Teirlinck in 1998. Since then, she has played as a freelance actress in various theatre companies such as De Roovers, Walpurgis, tgStan, het Toneelhuis, hetpaleis and Het Zesde bedrijf, and has worked in productions by Jellie Schippers, Mannah De Pauw, Karlijn Sileghem, Arne Sierens and Thomas Janssens, among others.

Pessemiers-Benamar also acts in TV series and films. She can be seen in Dju, Zéro Default, Coppers, Je suis mort mais j’ai des amis, Deadline 14-10,  Lost in the middle, the Team, Bullets, Grond, FYVVM en Wij waren daar. Her best-known role is that of Zohra el Zarkaoui in the series De Ridder  [The Knight] that was broadcasted on national tv channel Eén.

As a theatre maker, Pessemiers-Benamar developed a very personal path together with  Nele Bauwens, which resulted in long-term collaborations with Luc de Vos and Manou Kersting, among others. Later, she founded Dunia vzw, where she developed her first creations. A mixed cast, and merging different languages and musical genres, are the building blocks of her work.

In collaboration with Sam Touzani, Pessemiers-Benamar wrote and performed MozaIk  (2010), a solo performance with musical support from Tomas De Smet and Myrddin De Cauter. As artist in residence at the former WGC Zuiderpershuis, she created amongst others Secret Gardens  (2011).

Based on her commitment to make the word 'inclusivity' disappear and to consider it as self-evident, Pessemiers-Benamar introduces people to each other, organises artistic speed dates and encounters, and develops various workshops and inclusive trajectories on demand.

Under the aegis of Dunia vzw, Pessemiers-Benamar and other makers started a long-term research project on Maghrebine narratives, Zie ze zei en draait den draad  (2011), and thus focused on youth theatre.  She also started the children's choir Shanti shanti Antwerpen together with MetX and the Festival of Flanders.

Pessemiers-Benamar created and wrote the play Baba  (2013) for hetpaleis. The text was published in Het klein Magazijn. The French version was published by publishing house Lansman.

Since 2016, company Action Zoo Humain has invited Pessemiers-Benamar to be part of the artisitic team. She appeared in the productions
De Waarheidscommissie  [The Truth Commission], Amnes(t)ie  and Dihya,
a co-production with hetpaleis.

After directing the bilingual performance Kukunor  (Flemish Sign Language and Dutch), the idea arose to rename Dunia vzw as Silence Radio. The team expanded and became a collective of hearing and deaf artists and performers.  In May 2022 they opened the doors of the 'accesible artist redidency' Villa De Vis in Asse. In 2023 they produce their first performance Portici.

In 2020 Pessemiers-Benamar starts the Belgian branch of ACCAC, a growing international network that promotes equality through culture and artistic skills. ACCAC centres are currently in Korea, Egypt, Nepal, Morocco, Algeria, Japan, France and Croatia. Together they promote a common mission through events, seminars, workshops and training sessions.

Since the 2021-2022 season, Pessemiers-Benamar has been part of the cast of Red - The Sorrows of Belgium III: Holy War, the final part of the trilogy created by director Luk Perceval at NTGent.