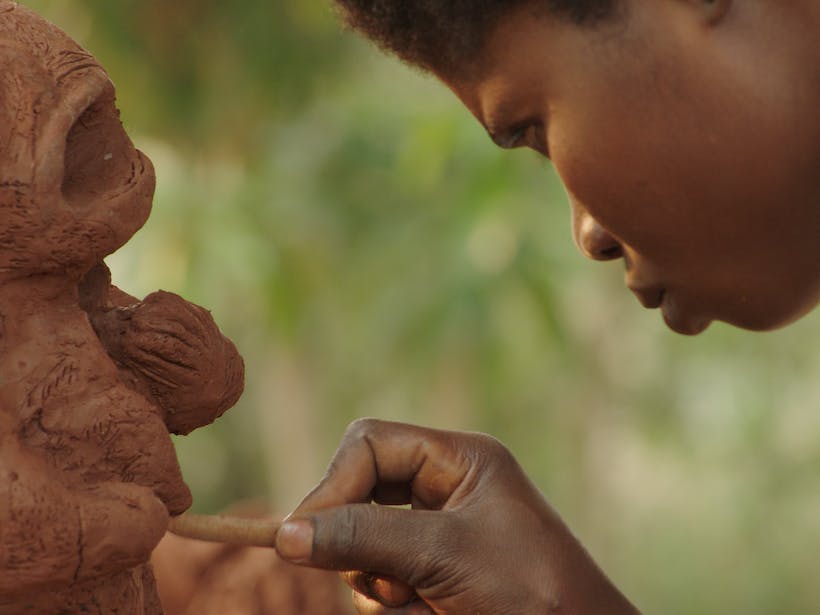 We open our season with a powerful statement in the hallway of our main theatre.

We're starting this new season with a clear commitment: that we'll continue to focus on our role as city theater, and on how to define this role. For example, in the field of decolonisation. In the same logic, we are presenting a new work of art by Congolese artist Irene Kanga, member of CATPC (Cercle d'Art des Travailleurs de Plantation Congolaise) in Lusanga, commissioned by Wiels in Brussels and co-produced with Human Activities. The sculpture is made in cocoa and palm oil, and bears the title Forced Love, a reference to the dark history between Europe and Africa. It reminds us how necessary solidarity is, but also: that every form of solidarity starts with a collective consciousness, also internationally.

As guest speakers at our opening night in our main theatre, including the inauguration of the statue, we welcome Flemish MP Jan Jambon, the Ghent alderman for Culture Sami Souguir and Bambi Ceuppens, anthropologist and senior researcher at the Africa Museum in Tervuren.

Irene Kanga is a member of the cooperative Cercle d'Art des Travailleurs de Plantation Congolaise (CATPC) in Congo. In order to combat the exploitation of natural resources by Western companies in plantations, CATPC buys back land from these companies with the with the revenues generated by the sale of artworks on the Western art market. Forced Love was modelled in clay by Kanga before being scanned and modelled in chocolate. The work is an evocation of the exploitation of cocoa and palmoil on plantations and of the asymmetric dynamics of international trade for plantation workers. A recent report of Human Rights Watch shows how people on western plantations in Congo earn 18 USD a month. Women sometimes recieve not more than 9 USD a month for a full time job.

The scene evokes a historical event: the rape of Kafutchi, one of the women of the Pende chef Matema Kelenge, by Belgian colonial agents during a campaign of forced recruitment of palm harvesters on the plantation of the Lever brothers in Lusanga (formerly Leverville) in 1931. This act led, among other things, to the beheading and mutilation of colonial agent Maximilien Balot in retaliation and to the great Pende revolt.

As a sculpture, Forced Love is part of the exhibition Risquons-tout at Wiels in Brussels, open until 10/01/21. NTGent buys this work of art in order to lend it to other Ghent art and educational institutions, after a presentation of several months in our entrance hall. So, Kanga's artwork goes on tour, as it were.

ABOUT IRENE KANGA AND FORCED LOVE

Irene Kanga is a member of the cooperative Cercle d’art des travailleurs de plantation congolaise (CATPC). To counter the extractive exploitation of natural resources by Western companies in plantations, CATPC buys back land with the revenues generated by the sale of artworks on the Western art market.

Kanga’s Forced Love was modelled by the artist in clay before being scanned and modelled in chocolate, a material evocation of the exploitation of cacao and palm oil on colonial and present-day plantations and the still asymmetrical dynamics of international trade for plantation workers. The scene evokes a historical event: the rape of Kafutchi, one of the wives of the Pende chief Matema Kelenge by Belgian colonial agents during a campaign of forced recruitment for palm cutters on the Lever Brothers plantation in Lusanga (formerly known as Leverville) in 1931. This act (among others) led to the decapitation and dismemberment of colonial agent Maximilien Balot in retaliation, and to the great Pende revolt.

The artwork is commissioned by Wiels, Brussels, where 'Forced Love' can be seen in the exhibition Risquons-tout until 10/01/21. Coproduced by Human Activities.

The film White Cube, directed by Renzo Martens, will come out soon. It focuses on plantations and museums and is situated in Lusanga, Congo.