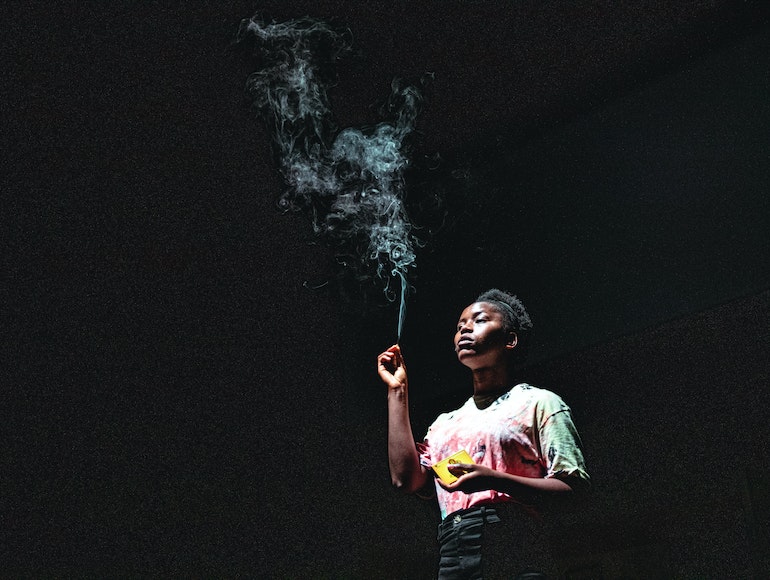 Multidisciplinary artist Princess Isatu Hassan Bangura (1996) graduated from the Drama Academy in Maastricht as a performer and has drawn on the forms and techniques of various art forms including performance, music and film ever since.

She has played at the Nationaal Theater and NTGent and has created several solo performances. These have often been described as 'rich in images and colours' and are sometimes perceived as radical. Her performances are often motivated by memories of her past and a mixture of both her West African roots and her current knowledge and experiences of the Western world. Her work reflects her religious and spiritual background. She tends to take the role of storyteller on stage, while the audience usually takes the role of witness. Her physical presence on stage aims to touch the primal essence of being human.

“As a maker and performer, I like to seek out and challenge boundaries. I like to touch that which is not yet there and that which cannot be understood. For me, theatre is about an honest experience, a unique exchange between myself and the audience. Theatre challenges my thoughts, my mind and my perception of the world. It forces me to look beyond the black and white narrative and find the grey areas of life itself.”

In the season '21-'22 she was part of the Ensemble of NTGent. She is a member of the cast of the production Grief & Beauty (directed by Milo Rau). In the season '22-'23 she will make a solo performance with Great Apes of the West Coast at NTGent, for which she returns to her mother country Sierra Leone.

“As a maker and performer, I like to seek out and challenge boundaries. I like to touch that which is not yet there and which cannot be understood."