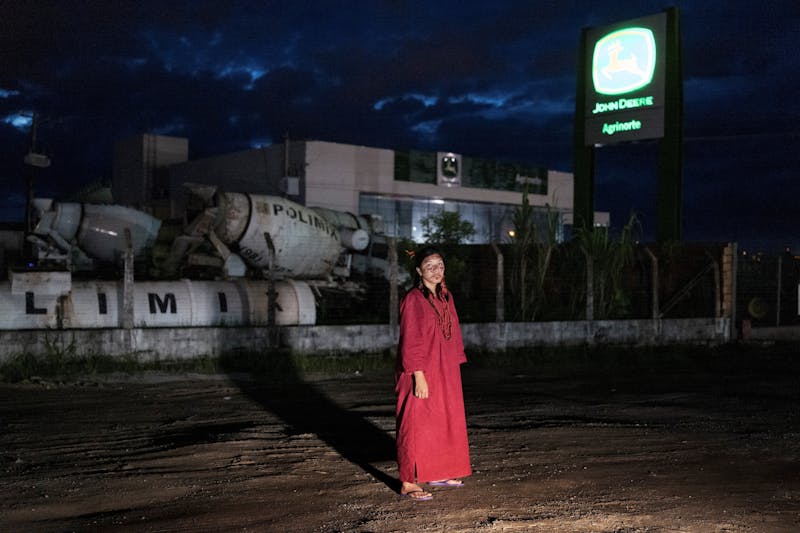 Kay Sara: This madness has to stop

| 15 May 2020
Actress and activist Kay Sara will perform Antigone in Milo Rau's 'Antigone in Amazonia'. She would have been the first indigenous person ever to have given a speech on the stage of the Burgtheater and to open the Wiener Festwochen. The festival was cancelled, but we do broadcast her speech. 'This Madness has to stop.' 16 May 2020.

This speech begins with many conjunctives. I should have been on the Burgtheater stage today to open the Wiener Festwochen. I would have been the first Indigenous woman to give a speech in this theatre, which is said to be the largest and richest theatre in the world. I would have started with a quote from a European classic, Sophocles’ play Antigone:

“Many things are monstrous, but nothing is more monstrous than mankind.”

I would have come to you directly from our rehearsals in the Amazon, for a new European-Brazilian staging of the play Antigone. I would have played the role of Antigone, who rebels against the ruler Creon, who does not want to allow his brother to be buried because he is considered an enemy of the State. The choir would have consisted of survivors of a massacre of landless people caused by the Brazilian government. We would have carried out this new Antigone on an occupied road that crosses the Amazon – those forests that are constantly on fire. It would not have been a play, but an action. Not an act of art, but an act of resistance: against that state power that is destroying the Amazon.

But none of this happened. The road that cuts through the Amazon forest wasn’t occupied and I did not play the role of Antigone. We are all scattered around the globe again, and we only see ourselves on a screen – like now.

I am Tucano and Turiano, a woman, an activist, an artist. I speak to you as all of this.

My European friends asked me how I’m doing. I’m fine. I am in the Amazon, in the north of Brazil, on the banks of the Oiapoque river. Nature surrounds me, it protects me and nourishes us too. I live in the rhythm of birds singing and the rain and performed an ancient ritual for my protection. For the first time in over 500 years, Europe and America are separated again.

I belong to the third clan of the Tarian people, the Clan of Thunder. I’m a daughter in the bloodline of the Thunder God, the daughter of a king, like Antigone. A myth says that we Tarians were stone people. But in modern times we assumed a human body, so we could communicate with the people who came to us. My mother, of the Tukana people, gave me the name Kay Sara. Which means “she who cares for others”. On my father’s side, I am of the Tarian people. But I speak to you in Tukano, in my mother tongue. I am a mixture of many things, like everyone else: I am Tariana and Tukana, a woman, an actress, an artist, an activist. I speak to you being all of that.

We Natives are called Indians. But I insist that we are called Indigenous, because ‘Indian’ is an offensive and pejorative word that was imposed on us by the invaders, to say that we are inferior. So, we need to change that reality. I became an actress so I could talk about us, about our existence.

Our story has long been told by the words of non-Indigenous.

Now is the time to tell our own story. Our misfortune began when the Spanish and Portuguese came to our land. First came the soldiers, then the priests.

Along with the Europeans came the diseases. Millions of people died. Millions more died at the hands of soldiers and clergy, but this event has been forgotten and is not written down anywhere. They murdered in the name of one God and one civilization, in the name of progress and profit.

Some worked for them. They were enslaved and murdered. Today, there are only a few of us left. I am one of the last of the Tarian people of the third clan. And just a few weeks ago, another disease came to us from abroad. The new coronavirus. You may have heard that in Manaus, the capital of the state of Amazonas, the disease is killing in a particularly terrible way. There’s no time for proper funerals. People are buried in mass graves that are covered with earth by tractors. There are also bodies in the streets that are not buried, like Antigone’s brother.

​The white people now take advantage of the chaos to penetrate even deeper into the forests.

The forests are being burned. Deforestation has increased. Who’s doing this? Whoever falls into the hands of the loggers is murdered. And what has President Bolsonaro been doing? What he always does: shaking hands with his supporters and mocking the dead. Since the virus emerged, he has instructed his team to ignore the Indigenous people. This is a call to kill us. Bolsonaro wants to complete the genocide of the Indigenous people that has been going on for over 500 years.

I know you’re used to reports like this. When it’s too late, seers show up. When Cassandra or Teiresias appear in the Greek tragedies, you know that the disaster has already taken its course. You like our songs, but you don’t like what we talk about. And when you listen to us, you don't understand us.

The problem is not that you don’t know that our forests are burning, and our people are dying. The problem is you’ve gotten used to these facts. But we haven’t.

So, I will tell you what you all already know: a few years ago, the tributaries of the Amazon dried up for the first time since we are aware that they exist. If we don’t act now, in ten years, the Amazon ecosystem will collapse. The heart of this planet will stop beating. That’s what our scientists say, and that’s what your scientists say too, and maybe it’s the only thing they agree on. We will disappear if we don’t act. We cannot be so selfish to deny the future generation the most beautiful we have, Nature, and everything it liberates for our survival.

We’ve gotten a lot of flyers signed by celebrities in the last few weeks. You want to fly less by plane, steal less, kill less. But how can you believe that after 500 years of colonization, after thousands of years of subjugation of the world, a thought can come to you that will not only bring more destruction? If you listen to yourself, you will find only your guilty conscience. And when you travel the world, you will find only the dirt with which you have contaminated us. There is no turning back. But we can’t give up. And we can’t let it destroy us anymore.

Now it is time for you to be silent. The time has come to listen. You need us, the prisoners of your world, to understand yourselves. Because the thing is so simple: there is no gain in this world, there is only life. And that’s why it’s good that I’m not on the Burgtheater stage. That I’m not talking to you as an actress, because it’s not about art anymore, it’s not about theatre anymore. Our tragedy happens here and now, in the world, before our very eyes.

And maybe that’s what worries me most when I hear Creon speak: he knows he’s wrong. He knows what he’s doing is wrong. That it’s wrong in every way. That it will bring his fall, the fall of his family, the Apocalypse. And yet he does it. He criticizes himself; he hates himself, but he still does what he hates.

We will resist together; we will be human. Each in his own way and place, united by our differences and our love for the life that unites us all.

This madness has to stop. Stop being like Creon. Let’s be like Antigone. Because when illegality becomes law, resistance becomes a duty. We will resist together; we will be human. Each in his own way and place, united by our differences and our love for life that unites us all.

Speech by Kay Sara, noted by Milo Rau in the context of and with the support from the Wiener Festwochen.
16 May 2020.

ANTIGONE IN THE AMAZON

SCHOOL OF RESISTANCE: THIS MADNESS HAS TO STOP