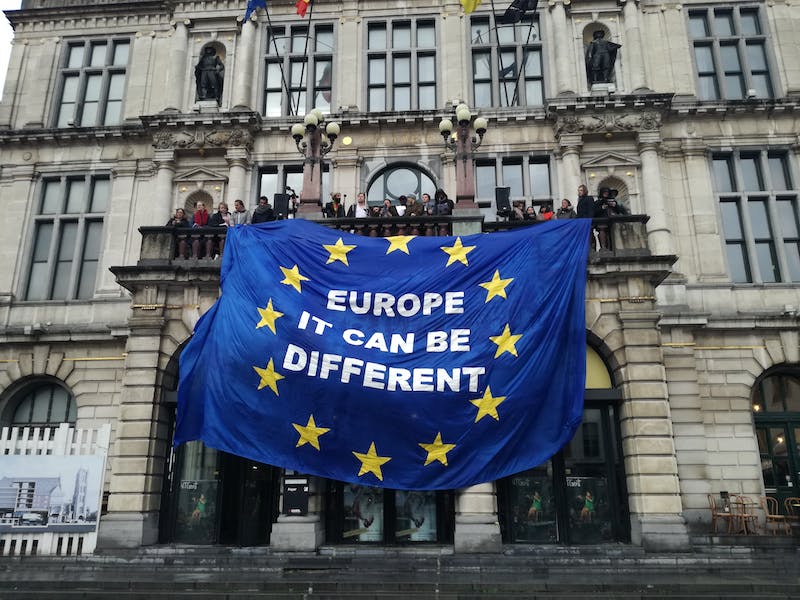 | 30 September 2020
Every day, tens of thousands of refugees try to survive on the borders of Europe: between the olive trees or on the asphalt, in leaky tents and containers. With hardly any access to water, food, toilets and medicines. The recent images of the devastating fire at the Moria refugee camp in Lesbos illustrate – once again – the collective failure of the European migration policy, calculated around the essence of the European project: respect for universal human rights.

It was not the first fire in Moria. When Covid-19 threatened to turn Moria into hell, no action was taken. On the contrary, the only emergency hospital of Médecins Sans Frontières was closed by order of the Greek government. Righteous people leaned back and let terrible things happen. And Europe remained silent. For the founders of the EU Treaty, however, the inviolable and inalienable human rights were central. But for Europe’s leaders today, they are secondary: national interests take precedence. Because in more and more European countries the ‘own people firs’ principle prevails, the essence of the European project is being pushed aside as a remnant of the popular alien elites. As a result, the concept of ‘European solidarity’ sounds increasingly hollow. Like a cynical joke that evolves towards complete indifference.

The current abuses are the result of half a century of policies that consisted of short-term improvisations, on the deployment of police officers and border guards, but also on technologies, databases and control rooms that produce illegality on an assembly line. It’s a policy based on denial. Europe prefers to outsource its obligations towards refugees to other countries. As far out of sight as possible, as it were. We want to solve it through reception in our own regions, but countries such as Lebanon and Jordan are already full and strangely enough, we are silent about the impact of military interventions by European countries in Afghanistan, Iraq, Libya and the ‘indirect’ wars in Syria, Yemen, Somalia or in the Sahel.

Our European policymakers actually organize this crisis themselves.

The refugees we rescue at sea are dumped in one and the same place. And when the camps at our borders are overcrowded, humanitarian disasters arise that plague both the refugees and the local population. The Libyan coastguard, funded by Europe and trained in Italy, ‘rescues’ people at sea to bring them straight back to the Libyan camps and slave markets, in the hands of people-smugglers and warlords. In the meantime, also in the media, people trying to cross the border are being fired upon with sharpness. President Von der Leyen, for example, congratulated the Greek border guards for the excellent way in which they stood up for Europe.

In short, we have created a Fortress Europe that can hardly be reached by legal means anymore.

Europe owes it to its principles to break this perverse circle. To re-humanize the policy on refugees. In other words: without discrimination and with respect for human rights. The only thing missing is the political will to do so. Because we have the resources, the know-how and the logistics to give the rejected at our European borders a dignified existence. We are fully aware that the European economy and labor market are now largely dependent on illegal and low-paid labor. Moreover, since a few decades the labor market has become so flexible that there are more and more jobs with which you, as an average citizen, cannot earn a living. Therefore, if we want less illegal migration and labor, we need to organize the labor market in such a way that you can make a decent living from the work you do.

What we want to put first is a fair, humane approach.

Also – or precisely – in these polarizing times. This starts with our use of language, in which some politicians like to use words like ‘waves of migration’ or ‘flows of refugees’. Not to mention the degrading character of verbs like ‘dyke’. It is still about our fellow human beings who are on the run.

After the horror of the First and Second World Wars, we Europeans promised future generations that together we would resist any form of dehumanization, discrimination and exclusion. We want to remain faithful to this promise. That is why we are launching this call, an initiative on behalf of a group of European art and cultural institutions. As part of civil society, we want to ask European policy makers that every art and cultural institution that signs this open letter to the European Commission be given the right to receive and support a refugee.

​We therefore ask for a visa for Belgium for one refugee per signatory.

In this way, we want to welcome the refugees who are now languishing on the European borders into our cities and regions, so that they can be a full part of our society, including the right to individual protection.

SCHOOL OF RESISTANCE: OUR HUMAN RIGHTS ARE ON FIRE.