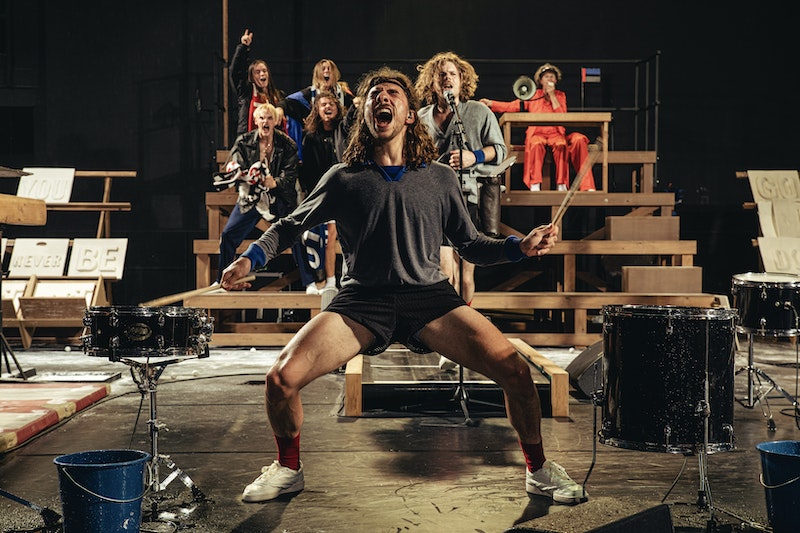 'ONE SONG' selected by New York Times as one of the best shows of 2022!

| 16 December 2022
The performance 'ONE SONG' by Miet Warlop and NTGent has been chosen by the New York Times as one of the best performances of 2022! "Incredible virtuosity," writes the newspaper. "A wild, exhilarating study of the absurd."
INFO & TICKETS

A huge honor and ditto recognition, that is the selection as one of the three best shows of 2022 by the New York Times for the cast and crew of ONE SONG - Histoire du Théâtre IV.  As well as for NTGent, which produced the show. In March and April 2023, ONE SONG  is shown again at NTGent.

The performance - a creation by artist Miet Warlop - premiered at the Festival d'Avignon last summer, much to the delight of the connoisseur audience there, who were on the benches every night. Ditto last October at NTGent Schouwburg after its Belgian premiere. The press was also very enthusiastic from the start. Reviewer Laura Cappelle of The New York Times already wrote this summer that the performance was "extremely entertaining". Now, she added this:

"Some of the best shows to debut in France in the past year brought unclassifiable feats of virtuosity onstage, like “One Song,” which played at the Avignon Festival. Created by the Belgian artist Miet Warlop, it was another idiosyncratic entry in the 'History/ies of Theater' series that the Belgian playhouse NTGent has developed in collaboration with the festival. In 'One Song', a group of musicians/competitors perform a single song on a loop while doing an extreme workout. (A violinist plays while doing squats and leg lifts on a high beam.) Throughout, as the performers thoroughly exhaust themselves, a male cheerleader and a group of fans take turns encouraging and booing them, while a referee mumbles incomprehensibly in the background. The instant standing ovation in Avignon wasn’t merely a way to reward the performers for their efforts: “One Song” lingered in the mind as a wild, exhilarating studyin absurdity."