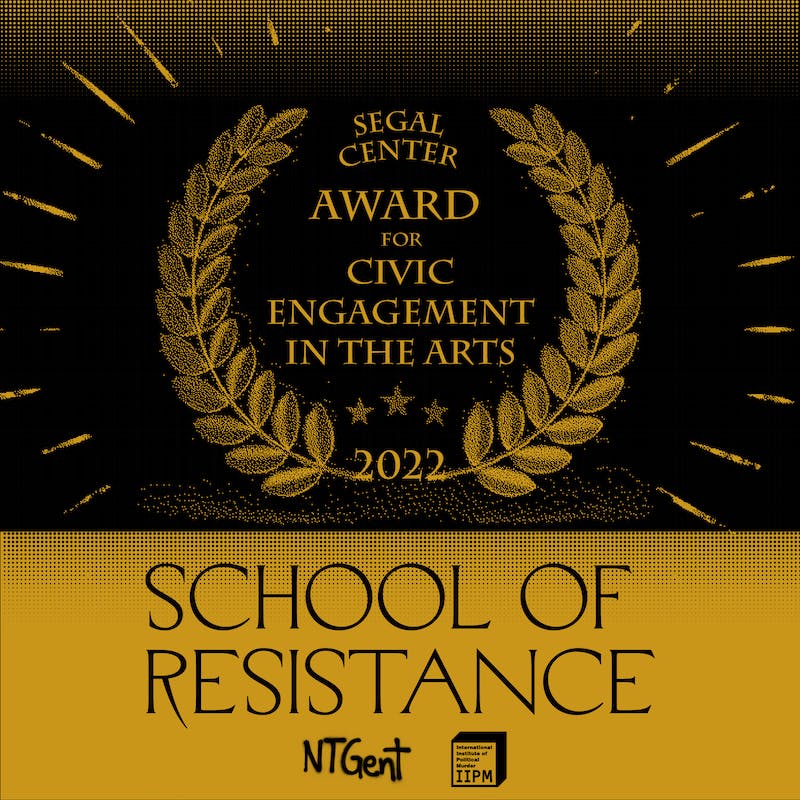 | 14 January 2022
We are pleased to announce that 'School of Resistance', the debate series created by Milo Rau, NTGent and IIPM, has been nominated as one of the 10 most significant theatre and performance projects worldwide by the Segal Theatre Center in New York.

In New York, a selection of only ten pioneering projects worldwide is honored today (Friday January 14) with an Segal Center Award for Civic Engagement in the Arts. In this way, the Martin E. Segal Theater Center, a renowned institution, honours individuals and groups who have demonstrated exceptional achievement in the field of the arts during the corona pandemic (2020 and 2021).

We are pleased to announce that School of Resistance, an ongoing debate series started by Milo Rau, NTGent and IIPM, has been nominated as one of these ten most significant theatre and performance projects.

We would like to congratulate dramaturgs Eline Banken and Kasia Wojcik, founder Milo Rau, all the guest speakers and the entire team! The next edition of the School of Resistance will take place online on January 29. After Munich, Berlin and Cologne, the School  is landing in Ghent on March 4 and 5.

From the jury report:

"In search of strategies of artistic resistance, Milo Rau the NTGent and IIPM - International Institute of Political Murder - founded a globally networked 'School of Resistance' as a hybrid livestream debate series. As a symbolic institution of the future, the initiative examines aesthetic practices of resistance. Activists and artists discuss art as a transformative, reality-creating practice. In 2021 also of importance: Rau's film 'The New Gospel', his Theater of the Real project 'The Congo Tribunal - The Kolwezi Hearings', the UNESCO-NTGent created project 'A filmschool for Mosul' and his Golden Book V 'Why Theatre?', where Rau in his role as an editor asks 100 of the most influential artists and intellectuals in the world during The Time of Corona the fundamental question: Why?"

The awards ceremonywill take place on January 22nd, 6:00 pm Berlin time at a Zoom event in New York. An overview of all 10 selected projects can be found here.

SCHOOL OF RESISTANCE: THE ART OF ASSEMBLY XII