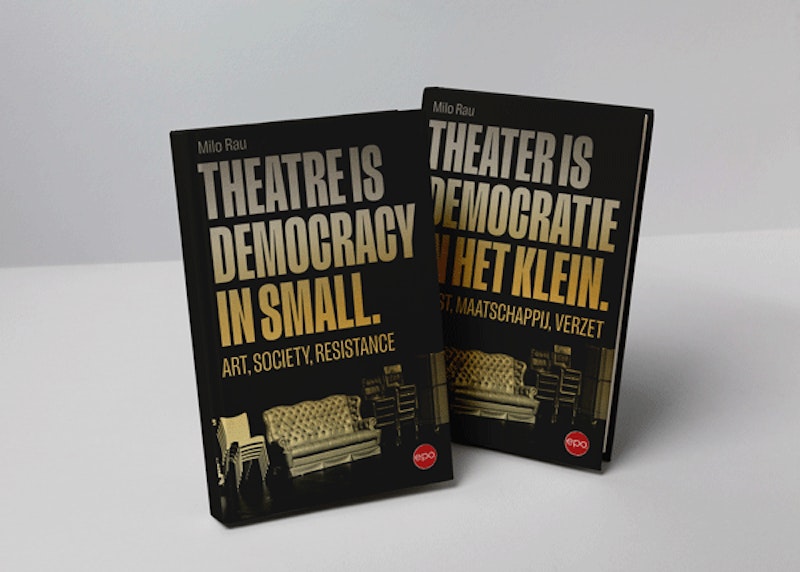 | 6 September 2022
In a brand new book, artist Milo Rau, artistic director at NTGent, discusses what the (city) theatre of the future could be.
BUY YOUR COPY

The start of the new theatre season is the perfect moment to challenge the way we think about theatre, to reflect on the social impact of theatre and, more generally, on the power of art today. For the start of the 22/23 season, Milo Rau publishes his perhaps most fundamental and self-critical work, a personal reflection of the artistic and activist work of the last 20 years together with IIPM and NTGent: Theatre is Democracy in Small (208 p., English and Dutch edition).

What is radical, what is engaged art – and why art at all? How can long term transnational collaborations be sustainable? What are artistic “micro-ecologies”? And how can a modern (city) theatre function in a way that gives space to the diversity of a society and all its conflicts?

In programmatic texts, an extensive exchange with critic Marijn Lems about the lessons and failures of his artistic career, and in a collective manifesto - together with NTGent’s house artists Miet Warlop, Lara Staal, Luanda Casella, Chokri Ben Chikha and Jesse Vandamme - Rau tries to answer the question: What is the Theatre of the Future?

Milo Rau (Bern, 1977) has been artistic director of the International Institute for Political Murder (IIPM) since 2007 and of the Ghent city theatre NTGent since 2018. Since 2002, he has realised over fifty plays, films and productions; in 2019 he received the European Theatre Prize for his entire oeuvre. In addition to his work as a director, Rau is also a very prolific writer - he with more than 15 publications to date, which have been translated into English, French, Italian, Dutch, Chinese and Norwegian, among other languages, and have been awarded some of the most prestigious German literature prizes.

"Art is the melancholy of a failed revolution"