Luk Perceval, one of the most important artists in European theatre

| 20 April 2022
At the end of April 2022, NTGent will premiere the brand new performance 'Red', directed by Luk Perceval, one of the most important artists in European theatre for decades. Get to know his oeuvre and read more about the trilogy 'The Sorrows of Belgium' in this extended portrait.

Luk Perceval was born in 1957 in Lommel, a city in the Flemish part of Belgium. Having completed his education at Koninklijk Vlaams Conservatorium in Antwerp, he became an actor at Antwerp Koninklijke Nederlandse Schouwburg. In 1984 in Ghent, together with Guy Joosten, he founded Blauwe Maandag Compagnie (BMC) in which he made his first steps as a director. Over the years, his performances gained more and more acclaim, and in 1998 the merger of BMC and KNS brought to life Het Toneelhuis, a new theatre with Perceval as art director.

At that time, he was one of the most significant representatives of the Flemish Wave, a generation of Flemish artists employing such different aesthetic as Jan Fabre (born 1958), Jan Lauwers (1957), Alain Platel (1959) or Anne Teresa de Keersmaeker, who in the 1980s revolutionized the European performance. Despite the differences, what they had in common was a certain radicality in opening the language of theatre and entering a dynamic dialogue with other cultures and disciplines of art. All of them quickly attracted the attention of international curators.

Perceval proposed a completely new system of rehearsing and working with the text, based on improvisation and finding solutions collectively, prioritising the actor’s “here and now” on stage over being faithful to the author. In Perceval’s theatre, the author is to serve the actor, not the other way round. Its key elements are liveliness, authenticity of the man on stage which entailed abridgements, shifting and manipulation of the text. Perceval also proposed to work in the Flemish rather than Dutch dialect which required the translation of the classics into Flemish.

Nowadays, some of those practices are well-known in theatre, but in the 1980s and 1990s they were ground-breaking. It does not mean, however, that today Perceval’s theatre is. Passé. Quite the opposite, the director still challenges himself, intimidates with his precision, simplicity and sublime form of his performances, the poetics of text abridgement, a particular care for the sound effect and team-based acting. Today, he is one of the most important artists in European theatre.

In Perceval’s theatre, the author is to serve the actor, not the other way round

Perceval’s oeuvre includes ancient drama, French classics, Chekhov’s and especially Shakespeare’s works. His adaptations of Shakespeare’s drama are what won him his place on the European stage. Ten Oorlog, his 12-hour long marathon from 1997, was a montage of all of Shakespeare’s kings’ chronicles. Talking about the contemporary world, the director combined the Renaissance poetry with pop music and street jargon. The German version of this performance titled Schlachten!, which was also the first of Perceval’s works directed abroad (in Schauspielhaus Hamburg), received awards at the Theatertreffen festival in Berlin 2000. As a result, many European theatres invited Perceval to cooperate with them.

Since 2005, Perceval had directed mostly in Germany. First as resident director in Schaubühne am Lehniner Platz in Berlin, then as chief director of Thalia Theater in Hamburg (2009–2014). The artist was also resident director and showed his performances in such renowned institutions and at such festivals as Münchner Kammerspiele, Deutsche Staatsoper Berlin, Wiener Festwochen, Salzburger Festspiele, Festival d’Avignon, Edinburgh International Festival.

After many years of living and working in Germany, Perceval became increasingly disenchanted with the German theatre system – its inflexibility, commercialization, repertoire and organisational limitations. In 2018, he decided to return to Antwerp for good, and Milo Rau who became director of NTGent in the same year and was an equally fervent critic of the German theatre system, invited Perceval to cooperate with him. Since then he has been a residing artist of the Ghent theatre. 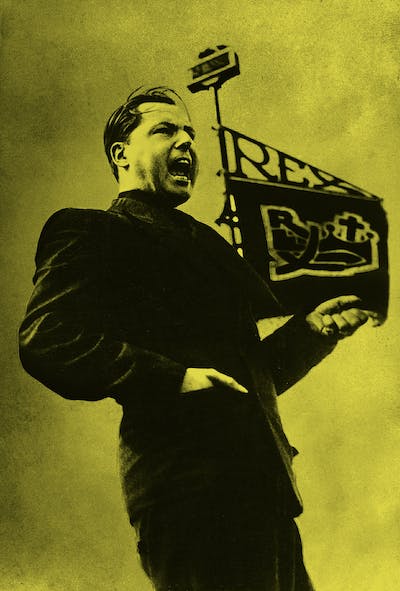 The idea of a project devoted to the history of Belgium originated nowhere else but in NTGent. Milo Rau (whose works were presented during the festival in 2021) creates an overtly political theatre and that is the character of his NTGent. Perceval’s trilogy The Sorrows of Belgium tells the story of three shameful chapters in Belgian history. The performance Black (2019) is devoted to the exploitation of Congo by King Leopold II; Yellow (2021) presents the times of the Second World War and the collaboration of the Flemish with the Nazis. The last part Red (2022) focuses on the terrorist attacks in Brussels in 2016. The series was inspired by Hugo Claus’s autobiographic novel The Sorrow of Belgium from 1983, while the titles of the parts refer to the tricolour flag of Belgium. Perceval took the idea from Krzysztof Kieślowski’s Trzy kolory.

Considered as one of the most outstanding Belgian writers and playwrights, in his novel, Claus talks about “the sorrows of Belgium” from the years 1938–1946. He depicts the conflict between Flanders and Wallonia, collaboration of the Flemish nationalists with the Nazis and then settling scores with them, from a perspective of a person born in the 1920s, which is the generation of Perceval’s father. The director wanted to look at Belgium from a contemporary perspective to show what formed it, what it struggles with today, how the past is interconnected with the present and determines the future. His The Sorrows of Belgium is a moving, sometimes surrealist story of a country which today is the heart of Europe, a country without a nation, divided internally, in which only a few percent of inhabitants consider themselves Belgian. Actors of different generations, cultures and languages take part in the three performances, which reflects the ethnic and linguistic diversity of the contemporary Belgian society. 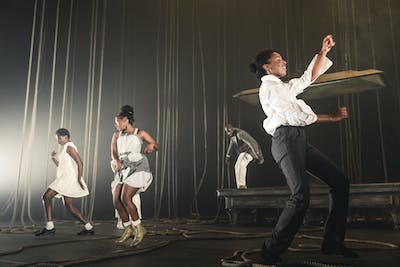 However, the choice of the subject is surprising. The artists of Perceval’s generation and Perceval alike have been perceived as detached from the local background. They did not talk about Belgium, or invite the European audiences to discuss the antagonized relationship between Flanders and Wallonia. Quite the opposite, they engaged artists who spoke different languages and touched upon universal matters. Political subjects, if they ever appeared, were never explicit, but in the background of other stories, with no moralizing whatsoever.

In the abovementioned performances Ten Oorlog and Schlachten!, Perceval accentuated the bloody mechanism of power struggle, using Shakespeare to portray the condition of contemporary world and the sources of it. In Molière  (2007), built from the comedy of the French playwright, Perceval put his characters in contemporary times and made the hypocritical Tartuffe a Buddhist guru. In the performance The Truth about the Kennedys, he presented the mafia roots of the US President’s family in a convention of a media investigation combined with an ancient fate-marked saga.

However, shouldn’t the decision to play in different languages, not to use French or Dutch translations and translate the works into Flemish be seen as an attempt to emancipate the Flemish theatre, and as such be considered a political gesture? Shouldn’t the formal experiment proposed by the Flemish wave be seen as such?

Until the end of 19th century, French was the only language used in Belgian national theatre. The Flemish national theatre, when it was officially brought to life, focused on plays which were successful in Berlin, London or Paris and employed staging solutions that worked elsewhere. Until the 1970s, the Flemish theatre had no identity, no masters, codes or manners. The Flemish wave was the first to give it its own character. Nevertheless, none of the New Wave artists would say that breaking up with the French theatre, dominant in Wallonia, was a conscious political decision.

In the context of Perceval’s works and the Flemish Wave, The Sorrows of Belgium  is unique. It is a clearly defined story about Belgium, the country in which Luk Perceval was born, which he left and to which he returned. The country whose 19th century king, Leopold II, created a death camp in his own private colony (in 1908 Belgium bought the colony from him, creating the Belgian Congo). At school, as the director says, he did not learn anything about Congo. Even today, only few Belgians are aware of the Belgian responsibility for the death of the millions of Congo inhabitants: “Books describing Congo in a sexist and racist way still are bestsellers, which is shocking, because after all mass graves with 20 million skeletons were discovered there”.

Belgium also has a problem facing the fascist collaboration of the Flemish with the Nazis during the Second World War. According to Perceval „still today, if not glorified, it is at least minimized and whitewashed”. Flemish right-wing politicians present the Flemish people as the victims of Napoleon, then the First and Second World Wars as well as the decision-makers from Wallonia who treated them as second-rate citizens. As the director underlines, it is a very important subject in the context of the conservative turn towards nationalism in the whole Europe. As he says, “it is very important today to stop claiming it is all politicians’ fault”. It is necessary to awaken in people a sense of their own responsibility.

The said awakening is one of theatre’s key functions according to Perceval. It applies to the issue of immigration too. Belgians publicly declare openness and acceptance, but fail to notice the signs of racism in their day-to-day behaviours and choices. “We were shocked in Belgium when studies showed that the majority of foreign ISIS fighters came from Brussels. The Muslim minority in Belgium is discriminated to such an extent, to such an extent it is not a part of this country, that they left for Syria to take part in the war against the West”. 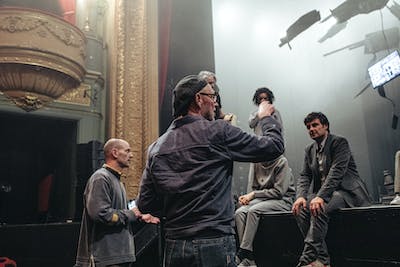 Coming to terms with Belgian history is indubitably the subject of the trilogy, which, however, does not make it a theatre of criticism. Perceval is not interested in being part of the “community of the moral high ground”:

"I am not interested in creating a theatre serving to ascertain the social status, because once at home the spectator easily forgets about the values they have just applauded. In my opinion, we should start thinking more seriously about theatre as a form of art. And it consists in confronting, giving an opportunity to identify even with an evil character on stage in order to understand why our society functions this way, not the other. Why I function this way, not the other, what do I bring into the society which is the outcome of my behaviour, the way I think, approach the reality? It is more effective than criticizing."

Thus, the trilogy The Sorrows of Belgium is an overt commentary on Luk Perceval’s mother country, although it is not an overtly politically involved theatre. It does not aim to point fingers either. It is a story of a small country’s great aspirations, of people in the melting pot of history, of macro-politics and everyday life. Perceval, who is also a yoga and meditation instructor, believes in a spiritual path that can be opened by theatre. Stage art is for him an art of repeating things over and over again, like a prayer or spell; it reminds us of our mistakes, failures and misfortunes. It is an art of “repeating them every day like a litany, because our memory is short (…) The beauty of this ritual lies in being in a shared space, the space in which all of us focus our attention on the action on stage, action which reiterates the old conflicts. This focus gives us some kind of understanding, empathy or, even better, katharsis”.

BLACK - THE SORROWS OF BELGIUM I: CONGO