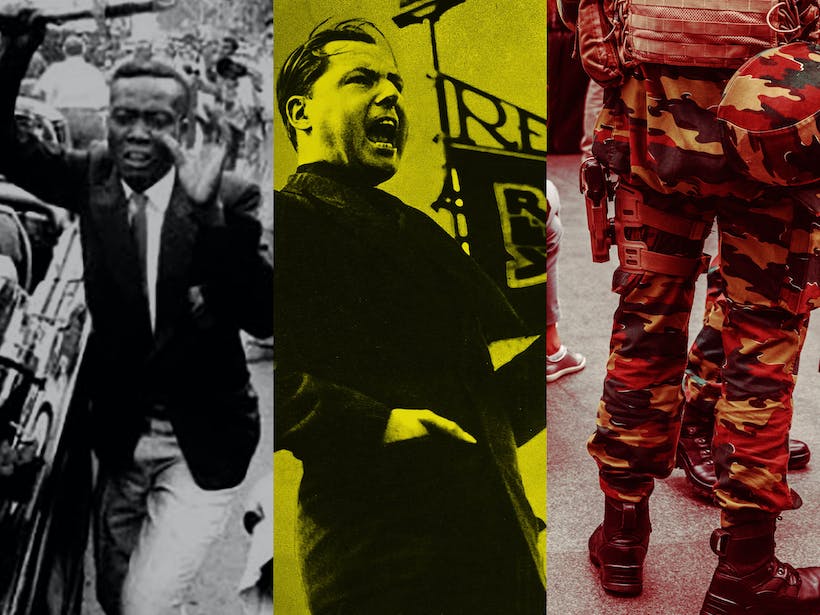 NTGent
With 'The Sorrows of Belgium', director Luk Perceval realised at NTGent a unique trilogy about dark passages in the history of our country. The three parts can be seen as a theatre marathon in our Schouwburg this autumn.

Surtitles in French, Polish and Dutch+

German surtitles only for YELLOW  and RED

In The Sorrows of Belgium, historical events form the starting point for a portrait of a country that shows how a political agenda leads to human suffering time after time, how surrealism is never far away and how a small nation tries to hold its own among major international powers: sometimes with craftiness but more often with desperation...

On 13 November 2022, this trilogy can be seen in its entirety in Ghent during a unique theatre marathon. Moreover, you have the chance to combine this marathon with culinary delights.

A true account by one of the first travellers to Congo in history: African American William Henry Sheppard. After his adventure, across completely unknown territory, he was one of the first to denounce Leopold II’s disgraceful exploitation. A story that testifies of a deep-seated fear for the unknown and an ubiquitous racism.

Trailer 2: Black/ The Sorrows of Belgium I: Congo from NTGent on Vimeo.

1933-1936. A young generation of Flemish people dreams of a new world order. Many joined the Nazi ideology and even went to the eastern front. Were they really that naive? A play about the Flemish collaboration during WWII.
A multilingual choir that evokes the grim zeitgeist of the 1930s, supported live by the music of composer and multi-instrumentalist Sam Gysel.

Yellow (trailer) from NTGent on Vimeo.

On 22 March 2016, 35 people were killed and 340 wounded in bombings in Brussels and Zaventem. The bombers were fighters who had returned to Belgium from Syria, linked to the terrorist group IS. They used nail bombs to make as many casualties as possible. Rather than a reconstruction of the facts, Red is a reconstruction of violence: what precedes a terrorist attack? Which narratives are dominant, especially in the media?

Surtitles in French, Polish and Dutch+

German surtitles only for YELLOW  and RED